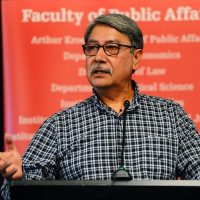 Satsan (Herb George) is one of the Wet’suwet’en Hereditary Chiefs of the Frog Clan and a long-time Speaker for the Wet’suwet’en Nation. He has over 40 years of experience working towards recognition and respect for the inherent right to self-government in the courts, classrooms, and communities. Early in his career, Satsan was a key figure and strategist in the Delgamuukw-Gisdayway decision which ruled, for the first time, that Aboriginal Title and rights exist in law and are recognized and protected under section 35. Following the decision, Satsan went on to serve two terms as elected regional chief, representing BC at the Assembly of First Nations. He has lent his expertise to build educational programming around Aboriginal and Treaty rights and the inherent right to self-government in universities across Canada.