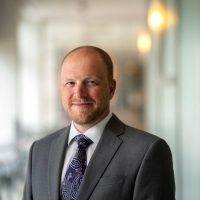 Jeff got started on a career in mass spectrometry (MS) during his undergraduate research at Trent University’s Water Quality Centre with Professors Steven Rafferty and Raymond E. March.  His honours thesis initiated a thorough MS-based examination of the quaternary structure of the enzyme nitric oxide synthase, revealing fresh information on the behavior of non-covalently bound species in the gas phase (J Am Soc Mass Spectrom 15:629).

Jeff continued MS-based research through pursuing his doctoral studies with Professor K. W. Michael Siu at the Centre for Research in Mass Spectrometry, York University, ON.  In addition to completing the project initiated at Trent University, Jeff’s efforts elucidated the protein complement of cilia from Tetrahymena thermophila in a study that represented the largest application of performing proteomics on an unannotated and translated genome (J Proteom Res 4(3):909).  The success of Jeff’s doctoral work led to five separate personal invitations to speak on his work and afforded him the opportunity to present his research on 17 additional occasions.

Upon completion of his Ph.D., Jeff accepted a Postdoctoral Fellowship at the Ottawa Institute of Systems Biology under the direction of Professor Daniel Figeys where he gained extensive expertise in quantitative phosphoproteomics and lipidomics using MS and microfluidic tools.  His efforts resulted in 8 peer reviewed research publications, 4 refereed review articles, 2 invited presentations and he was able to present his research on 8 additional occasions.  Jeff conducted experiments to characterize the changes that occur in protein phosphorylation during the process of neuronal differentiation (J Proteom Res. 6(8):3174).  His efforts were discussed as a highlight article in the Journal of Proteome Research (J Proteom Res.6(8):2919).

In 2007, Jeff accepted a promotion at the OISB as a research associate where his research efforts shifted to the field of lipidomics.  His efforts led to the development of a novel gas phase method to elucidate the structure of complete, intact phosphoglycerolipid molecules using low resolution mass spectrometric techniques (Rapid Commun Mass Spectrom22:3579).  During the 10 months of his research assistantship, Jeff produced 2 peer reviewed research papers on lipidomics, one refereed review article and was invited to present his research on five different occasions.

Jeff was hired as an Associate Professor in the Department of Chemistry and the Institute of Biochemistry at Carleton University in 2008. Since that time, he has developed a strong research group that uses MS to study the biomolecular dynamics of living systems.  In addition, his research has expended to include a novel chemical derivatization technique called TrEnDi that increases the sensitivity of proteomics and lipidomics analyses.  In 2015, Jeff established the CMSC with the aim of collaborating with the public and private sectors to use MS to investigate research problems. In addition to research, Jeff is Carleton University’s Academic Colleague and sits on the Quality Council at the Council of Ontario Universities.  He teaches second-year Analytical Chemistry (CHEM 2302 and CHEM 2303), 4th year Advanced Applications in Mass Spectrometry (CHEM 4304), the graduate counterpart of this course (CHEM 5109) as well as methods in proteomics course at the graduate level (CHEM 5900/BIOL 5004).