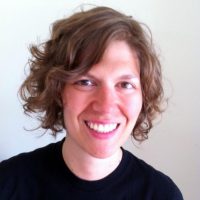 Laura Horak is Associate Professor of Film Studies at Carleton University and Director of the Transgender Media Lab and Transgender Media Portal. She investigates the history of transgender and queer film and media in the United States, Canada, and Scandinavia. She is author of Girls Will Be Boys: Cross-Dressing Women, Lesbians, and American Cinema, 1908-1934 (Rutgers UP, 2016) and co-editor of Silent Cinema and the Politics of Space (Indiana UP, 2014), Unwatchable (Rutgers UP, 2019), and a special issue of Somatechnics on trans/cinematic/bodies. Horak is a white cis queer settler scholar who is here to leverage her privilege and institutional resources for the revolution.

She is cross-appointed to the Pauline Jewett Institute for Women’s and Gender Studies and the Institute for Comparative Studies in Literature, Art, and Culture (ICSLAC) and a core faculty member of the Collaborative Specialization in Digital Humanities.

Supported by a SSHRC Insight Development Grant and an Ontario Early Researcher Award, Horak is researching the history of transgender, Two-Spirit, nonbinary, intersex and gender-nonconforming filmmaking in Canada and the United States and building the Transgender Media Portal, a website and database highlighting the work of trans filmmakers.

Her co-edited anthology, Unwatchable (Rutgers UP), with Nicholas Baer, Maggie Hennefeld, and Gunnar Iversen, was published in January 2019. With over 50 original essays by leading scholars, artists, critics, and curators, this is the first book to trace the “unwatchable” across our contemporary media environment, in which viewers encounter difficult content on various screens and platforms. The volume offers multidisciplinary approaches to the vast array of troubling images that circulate in global visual culture. Read an interview with Horak and her co-editors in Film Quarterly.

In 2018, Horak co-edited a special journal issue of Somatechnics on “Cinematic Bodies” with Cáel Keegan and Eliza Steinbock. Read the introduction: “Cinematic/Trans*/Bodies Now (and Then, and to Come).”

Horak is also writing a book titled Cinema’s Oscar Wilde: Mauritz Stiller and the Production of Modern Sexuality (under contract with Rutgers UP) that investigates the ways that cinema participated in the Swedish project of modernizing sexuality via a case study of the gay, Jewish, Finnish-Swedish director Mauritz Stiller.

Her first book, Girls Will Be Boys: Cross-Dressed Women, Lesbians, and American Cinema 1908-1934 (Rutgers UP, 2016), uses archival research to overturn long-standing assumptions about gender and sexuality in American film history. It was one of the Huffington Post’s Top Film Books of 2016, a finalist for 2016 Richard Wall Memorial Award by the Theatre Library Association, and longlisted for the Kraszna-Krausz Best Moving Image Book of 2016. Read Horak’s interview about the book in Film Quarterly or listen to her discuss it with Susie Bright.

Horak is also on the Editorial Board of the Journal of Cinema and Media Studies and is a collaborator on the SSHRC Insight Partnership Grant “Archive/Counter-Archive: Activating Canada’s Moving Image Heritage.”

Selected publications on transgender media include:

“The Many Faces of Trans Cinema.” Special issue on Trans Cinema. Z Filmtidskrift, December 2018. In Norwegian.

“The Queer and Not-So-Queer History of Early Hollywood Revealed in New Book ‘Girls Will Be Boys.’” Women and Hollywood. August 4, 2016.