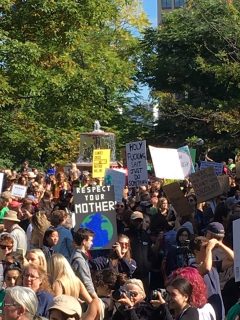 ALiGN recently spoke with several students who attended the climate change protest on Friday, September 27th, on Parliament Hill in Ottawa, inspired by the strikes initiated by Greta Thunberg. This includes Carmen Warner, a PhD student at Carleton University.

“I’ve had many conversations with people about the value of protesting, that it isn’t the same radical act it was and doesn’t have the same effects as it did in the 60s and 70s, which is absolutely true…But I also think it’s arrogant to assume you can know what the effects of a day like today could be. You don’t know how it will affect popular narratives that circulate about climate change, or if it will change the way people vote or just even think about the problem.”

ALiGN asked Warner to share some of the comments she heard others around her saying at the march.

“The crowd were definitely gathering against a common problem, but certainly don’t have the same ideas about what past actions have led to climate change and how best to combat it now and in the future. For instance, at one point, my partner overheard two people behind us talking about how “there sure seems to be a lot of anti-capitalism here…Meanwhile, just ahead of us was a sign that read “Kill Capitalism, Cure our Disease”.

When asked if she had any favorite signs spotted at the protest, Warner said, “Hell yeah. One said “Horsemen of the Apocalypse” and had a picture of people like Max Bernier, Doug Ford, and Andrew Scheer. Another said “Burn the System, Not Fossil Fuels” and another: “Don’t Frack With Mother Nature”.

What seemed to be some of the most important messages?

“This is obviously informed by what I think are the most important messages, but I was really happy that I personally didn’t see any signs that individualize responses to climate change, like nothing about straws or recycling… Instead I saw signs about things like moving away from fossil fuels. This felt overwhelmingly about the need to make systemic change, about demanding that the government take action, and that they take action now.”

Warner was hesitant to make any claims or predictions about what could potentially happen as a result of the protest.

“But if I could hope wildly for a moment, it would be that we start connecting the dots on a large scale between capitalism, imperialism, and climate change and demand structural changes that reflect that understanding.” 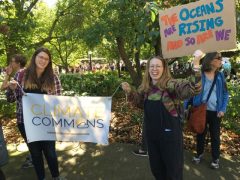 When ALiGN asked what message she would want world leaders to hear if she could have their undivided attention, Warner said she did not want the world leaders’ attention.

“I want the attention of the workers living paycheck to paycheck in fossil fuel and fossil fuel related industries who don’t see themselves reflected in climate change action discourse. I would say: don’t let your fears be mobilized into hate or anger by those that profit massively from your labor. They do not have your best interests at heart, only their own.”

For 15-year-old high school student Kevin Burns, part of the appeal of the protest included missing half a day of school “but I also know it’s important to be here – to be part of this huge gang pushing back.”

When asked to define “climate change,” Burns was eager to explain its impact.

“It’s the effects of humans- all the things humans do that negatively impact the earth. Like burning fossil fuels, car emissions, factories, and stuff like that. And it’s been getting worse and keeps getting worse every year. Sea levels are rising because the ice is melting and some countries – those that are close to lots of water – are experiencing the impact from that first hand.” 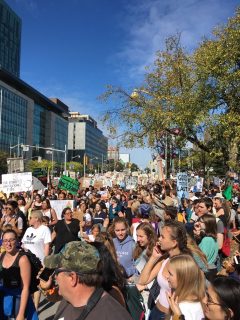 When asked why some don’t seem to take the threat seriously, Burns thought for a few minutes, then said, “Because it’s a big effort and everybody has to get involved, but everyone thinks it’s not their problem.”

Burns said we absolutely need to address global warming, though, and the sooner the better.

Burns also believes that “climate change deniers don’t actually think that it’s not real…but they’re just skeptical about the numbers, not the actual event.  And they need our sympathy and support, instead of just ridicule”

“These people aren’t all idiots.  We can’t just write them off, as they’re people too, and they’re going to continue to contribute to global warming and it’s their planet too. We need to work with them.”

Grade eight student Kelly Dodge said she’s afraid of what’s going to happen to turtles and other ocean wild life if we don’t become more aware of the dangers of plastic and, specifically, plastic straws.

“Plastic is killing off turtles and other animals in the ocean. We need to think about what we’re doing before it’s too late. What’s this world going to look like if we don’t force change as soon as possible?”

Burns agrees, saying this planet is the only home we have right now.

“And if we don’t do something about it now, today, our kids won’t have a planet.”