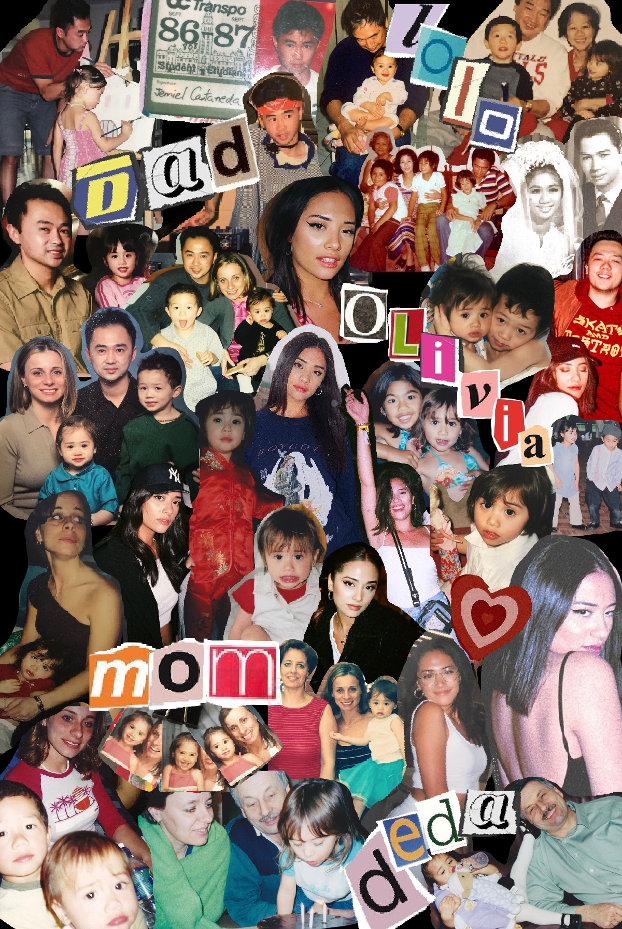 Collage by Olivia B. Castaneda

By Olivia B. Castaneda

In the book Orientalism, Edward Said says “Everyone who writes about the Orient must locate himself vis-a-vis the Orient”. In other words, the writer of the Orient must align with the position of the Orient. However, Said’s insights on such tensions of authorship between the writer and the Orient misaddresses the need for intersectionality in race discourses. An intersectional lens captures the interrelated nature between varying social categories, such as race, gender and class. According to Said, “Orientalism is a Western style for dominating, restructuring, and having authority over the Orient”. The Orient then, is a label established through Orientalism that marks an abuse of power over the East (the colonized) by the West (the colonizer). If the Orient exists only as a target for colonial authority, then it is placed into the framework of ‘the Other’, the other who is denied the possession of a personal cultural identity. The phenomenon of ‘othering’ symbolizes those who are subjugated based on classifications of race or class, gender, sexuality and disability, alongside the intersectional experiences between those.

In my position as a student writer, I am compelled to think critically about my own relations of race and how the racialization of my identity as a mixed ‘Other’ defines my level of knowledge to write about race, that of which specifically involves lived experiences of multiracialism and sexism. I self-identify as mixed, and while the origins of my last name are Spanish, I am Filipino and Czech. I have white privilege in certain spaces while I am ‘othered’, exotified and racialized in others.

To ground my discussion around the normative narrative of Asian/White exoticism, I chose to create a collage that depicts my personal narrative of mixed ancestry. The aim of this piece is to reject the male gaze of ‘Eurasianness’ or the ‘Eurasian’ woman because it contributes to the fetishization of multiraciality. Shohat and Stam in From Eurocentrism to Polycentrism say that exoticism objectifies “the colonized ‘other’ as an erotic fiction”, or more broadly, as an outlet of pleasure for the exoticist. In many cases, exoticism imagines racialized women in sexually objectifying ways that are rooted in patriarchy and white supremacy. For example, ‘yellow fever’ is a term used to describe a sexual fetish or obsession felt from a non-Asian person towards an Asian person, usually of the opposite gender. Similarly, the ‘Eurasian’, or someone who possesses ‘Eurasian’ traits, is also exotified. In my experience, I have been treated as ‘different’ but not ‘too different’ for white men, therefore being an attractive and accessible option for white men to enter both a racialized and sexualized space. This white erotic imaginary also transpires throughout the media and culture industries because it commercializes multiraciality as hyperfeminine, thus perpetuating hegemonic beauty standards that uphold whiteness and Eurocentrism.

Bearing in mind the saliency of exoticism, there are a number of objectives that were premeditated into the creation of the collage in. The first is to subvert the male gaze of the ‘Eurasian’ woman by characterizing the woman as an identifiable person with a social and cultural background beyond racialization. The second is to reorient the object into a subject. Because the mixed ‘other’ is a sexualized discourse, the collage works to personify one of many mixed-race narratives. For example, some of the self-sexualizing imagery was added as an act of empowerment and reclamation to the status of my body and sexuality. Lastly, the collage aims to promote self-expression, diversity, and individualism. While it demands the construct of visibility in the space of an academic institution, the primary focus here is to problematize and challenge the celebration of ‘Eurasianness’ as it reinforces colonial formations and the centering of whiteness within critical race discourses.

Celebrating ‘Eurasianism’ is a white-supremacist and capitalist discourse that disregards the diasporic histories of colonialism and discourses where multiracialism and sexism of mixed Asian/White women are precarious.  In traditional social, political and cultural research, multiracial people were viewed as biological threats to society due to deeply ingrained colonialist structures. More recently, ideologies surrounding multiracial people have shifted alongside the rise of mass media. The ‘mixed body’, which was once an anxiety for stakeholders of hegemonic systems, is now a value-producing commodity for a global capitalist society. Such discursive anxieties are rooted in white-supremacist and colonialist perspectives that view hybridity as exotic yet miscegenation as pathological. These descriptors are just some of the highly repugnant racialized and gendered classifications of mixed people. Not only do they construct mixed race people as commodities and market them as desirable objects, but they also contribute to the internalization of being objectified, exotified and dehumanized. Through this digital collage, I demonstrate that the racialization of ‘Eurasian’ mobilizes the notion of exoticism as it constructs Asian/White people as mere products of Western power rather than culturally diverse and individualized entities. It also disproves anti-racist ideologies because the term ‘Eurasian’ conflates race and racism with Europeanness and colonialist frameworks. Overall, this collage aims to reshape imaginations of the ‘mixed woman’ by highlighting a personal identity and cultural history that replenishes meanings of diversity and individualism.

Olivia Castaneda is a recent graduate in the Media and Communications program from Carleton University. In her ambitions to learn more about multicultural feminism, she devotes research to contemporary discourses and narratives surrounding Filipino gender studies in westernized contexts. As a future pursuit, she hopes to continue examining the sexual politics of mixed race and amplifying stories related to experiences of biracial Asian-ness.