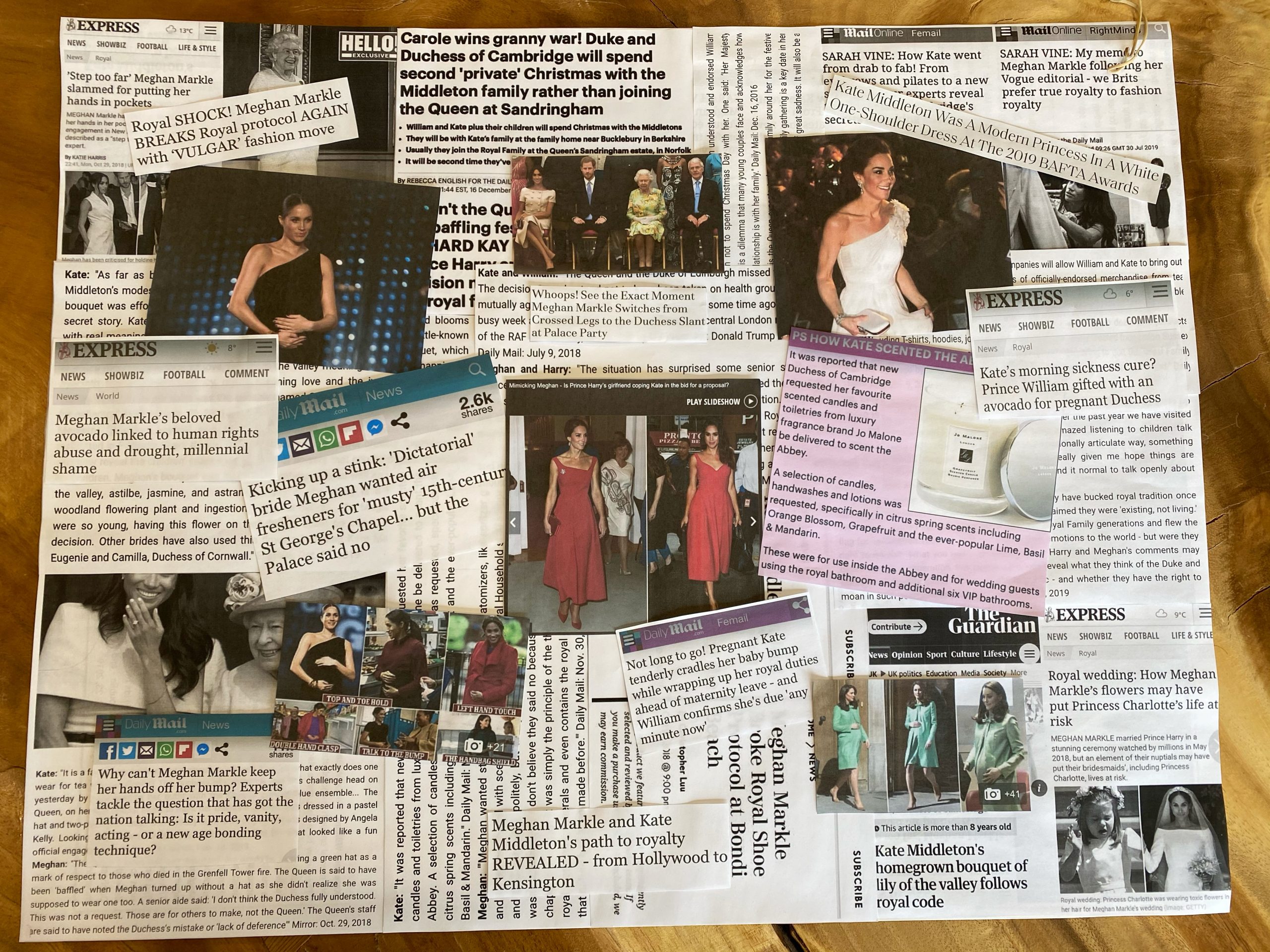 While global media is generally moving away from prejudice and racism, British media has fallen behind. My collage illustrates racism in British media by comparing headlines written about Kate Middleton with those of Meghan Markle. Meghan is biracial and was born in Los Angeles, whereas Kate is White and was raised in England. Prejudice surrounding Meghan’s upbringing and racial background, especially when compared to that of her sister-in-law, have led to the tabloids’ unfair treatment of Meghan. My collage was inspired by the interview “CBS Presents Oprah with Meghan and Harry,” which aired on March 7th, 2021. In the interview, Meghan and Harry discussed a variety of topics, including mental health, the media, and racism within the Royal Family. Since the couple announced they stepped back from their roles as senior royals in January of 2020, they could speak freely regarding the falsehoods perpetuated about them. Consequently, the interview revealed a number of racist allegations towards “the Firm” (the term Meghan uses when discussing the Royal Family and their public relations team) and gained traction on the internet. One story that went particularly viral was that the Family had several conversations with Harry about their concerns over how dark-skinned his child with Meghan would be.

The part of the interview that stood out the most to me, though, was how differently the media treats Meghan compared to Kate. To illustrate this, I visualized splitting my collage in half vertically. The right side of the collage features headlines about Kate, and the left features those of Meghan. This visual choice enhances the disparity that exists between the two women as subjects in the media. In the interview, Oprah asked Meghan if she was aware of the headlines, to which Meghan was, though not of all of them. Meghan was unaware of the more bizarre titles, such as one linking her love for avocados with illegal deforestation. This, along with many other headlines, are used in my collage with those of similar subject matter about Kate. For example, Meghan’s full avocado headline reads, “The pregnant Duchess of Sussex and so-called ‘avocado on toast whisperer’ is wolfing down a fruit linked to water shortages, illegal deforestation and all round general environmental devastation whereas Kate’s headline about avocados was, “Kate’s morning sickness cure? Prince William gifted with an avocado for pregnant Duchess”. Evidently, British tabloids display prejudice against Meghan, and the theme of this portion of the interview was this unfair treatment is based on race. Afterall, if the subject of an article about two women is the same, yet one woman is portrayed negatively and the other positively, and the only difference between the women is their race, well, the message is clear.

These prejudices are present in the British public sphere. The public sphere, briefly, refers to a realm of social life wherein public opinion can be formed, and access is given to all citizens. Since these tabloids are available both in-print and online, anybody can access them and post a comment. The comments on The Daily Mail under articles about Meghan largely reflect the negative view in them. Under an article titled, “Meghan’s got the upper hand: The Duchess of Sussex is always reaching out to touch Harry,” by Beth Hale, the comments read: “She’s sooo patronizing! Harry needs to tell her to back off and stop treating him like a child […] Deluded woman!” and, “He seems more and more like an imbecile under her total control. And she’s dangerous and bonkers too.” Accordingly, when British citizens make comments free of restriction in the public sphere, they prove just how influential these harmful, prejudiced articles are.

Aside from influencing the public sphere, I would like to discuss other ways in which media can perpetuate racism, as oftentimes they can go undetected by audiences. The implicit racism in these tabloids could remain inconspicuous surprisingly because media is shifting towards equality. That is, because explicit racial prejudice and discrimination have become less publicly tolerable. Many assume that if the racism is not explicit, then it must not really be racism. However, there are many ways in which media can mask these viewpoints. For example, when the subject of a media piece is given little to no agency, they become the “object of social commentary and ridicule”. This can be seen in British media’s treatment of Meghan. As is present in the various headlines featured in my collage, Meghan’s public persona had been framed to depict her as a vulgar, controlling, and discourteous person. This is especially poignant as Kate had previously been praised for doing the exact same things, such as wearing a one-shouldered dress, by the exact same tabloids.

This raises an important question: are tabloids such as The Daily Mail and Daily Express ‘required’ to release ridiculous headlines in order to attract readership? My response is simple: racist undertones are not necessary for an interesting story. However, The Daily Mail and Daily Express have both been in operation for over a century, surely they understand this concept. Why, then, was Meghan criticized for the very things Kate was praised for? One could argue that White readers of these tabloids would engage with texts about Kate regardless, so they did not need to employ striking or naysaying headlines about her. When it comes to Meghan, however, the assumption is their audience loves to hate her, and perhaps their writers, do, too. The Royal Family is a topic of interest in the British public sphere. Therefore, tabloids could employ equality when it comes to Meghan and Kate without sacrificing their audience.

So, why does this inequality continue?

The broader issue concerns diversity in the British press. While countless racial and ethnic backgrounds exist in England and the larger United Kingdom, “the British press remains stubbornly White”. In fact, only 0.2% of British journalists are Black, contrasting with the 13% comprising the general population.

This needs to change.

The identity of journalists is crucial. It determines what narratives are being fed to the population. As Milica Pesic, director of the Media Diversity Institute, put it, “You cannot […] have fully inclusive content [that is] fair, accurate and balanced if you don’t have diversified newsrooms”. This lack of diversity has consequences on individuals’ relationship with the media. Meghan marrying Harry was a huge milestone for BIPOC worldwide, but one that was short-lived due to the high amounts of unwarranted criticism she received simply for being biracial. This has detrimental effects on those who admire her and/or those who identify with her.

Overall, there is significant room for improvement in British media. It is evident they have failed to adopt the equitable, inclusive lens that has become prevalent in the global media environment. This was demonstrated by their treatment of Meghan Markle compared to Kate Middleton, as well as how the public affirmed these messages. In the future, British media would benefit from hiring a diverse range of journalists to broaden the perspectives in their work.

Arifah Baksh is a fourth-year student in the Communication and Media Studies program, and is minoring in Religion. She is from Ottawa, Ontario. Her family is originally from Guyana. In her free time, she enjoys producing videos for YouTube.