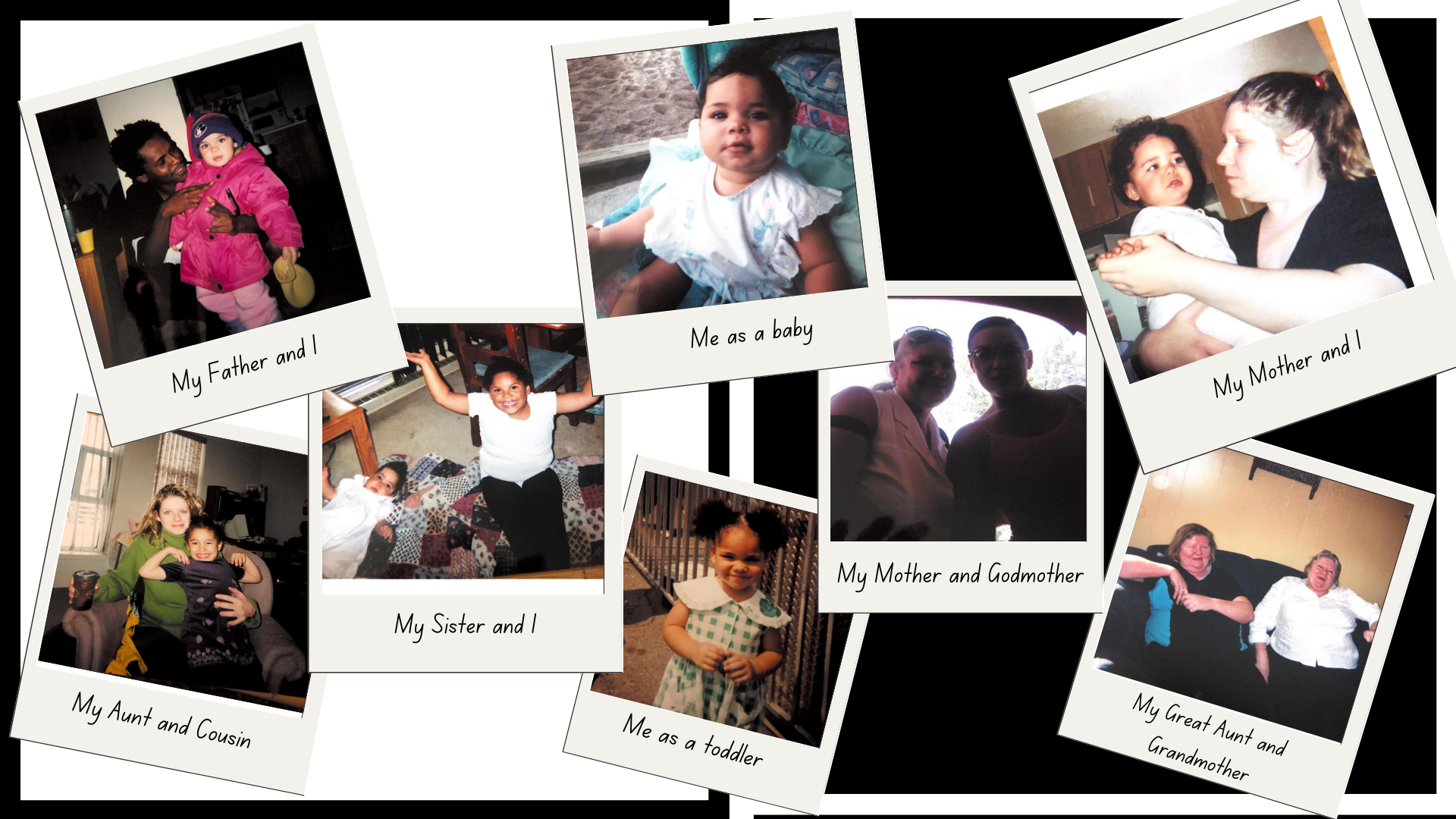 Too Black & Not Black Enough is a collection of family photos from my early childhood. This collage depicts being of mixed race (Black & White) and growing up in a predominantly White family. Growing up in a predominantly White family, my sister, cousin, and I were the Black people of our family although only being fifty percent Black. This became an indispensable part of my identity growing up as I did not look like my White family members having curly hair, darker skin, and prominent “Black” facial features. Recent media centred around the Black Lives Matter (BLM) movement highlighted for me that mixed-race individuals, specifically Black and White mixed individuals are often othered. This is a result of having two races who juxtapose one another historically and systemically. The media’s coverage ultimately made me question my own racial identity as I found a lack of bi-racial voices being highlighted during this time. Too Black & Not Black Enough ultimately touches on my experiences being viewed as only Black by my White family members while not feeling Black enough to publicly speak on my personal experiences being Black as I recognize my privilege being bi-racial.

The collage tells a story of growing up in a White family while Black. Growing up, I was the voice of Black issues and the Black experience in my family as no one else was the same race as my sister, cousin and I. This greatly impacted my identity as I found myself identifying more with my Black side since I more resembled Black features compared to the features of my White family. Additionally, growing up in a predominantly White city, I was known as the Black student in my school and the only person of colour person in my friend group. Since moving to Ottawa for university, I have been exposed to a more multicultural way of living and it made me question my place in regard to identifying as Black and speaking on Black issues. This internal discrepancy became prominent when the media started to heavily cover the tragic killing of George Floyd in May of 2020. I remember sitting down with my sister and speaking about our own experiences with racism growing up and it occurred to me that she had experienced more racism than I did due to her having a darker skin complexion, although we are both equally as Black and equally as White. This ultimately made me become hyper-aware of my skin colour compared to other Black and White mixed individuals. During this time, I had many friends come to be and lend their support as the entire Black community grieved George Floyd’s death. I found myself feeling guilty as I knew there are privileges to being half-Black and specifically having my skin-tone resulting in me remaining silent when speaking about my personal Black experience. Soon after, I realized that thinking this way is problematic and promotes colourism. I realized that just because my skin colour may be lighter, does not mean I did not experience anti-Black racism. Growing up in a predominantly White city there was countless times I was othered by my White peers and my Black features were often a topic of conversation.

As I am drawing on my own experiences, I wanted to include a personal aspect in the media that could not be achieved by making a poster or a meme. I began to scan images of those who I grew up closely with. I arranged the photos to display the Black people in my family on the white background and the White people in my family on the Black background with the two images of myself in the centre. The two images of myself in the centre illustrate how I am both Black and White as they bleed onto both sides. Each background also has a border of the opposite colour to further illustrate the intertwining of the two races to make up my bi-raciality.

Too Black & Not Black Enough is also inspired of Frantz Fanon in Black Skin, White Masks. In this book, Fanon shares his own experiences being a Black man, living in France . This relates to my personal experience of being Black in a predominantly White family. What drew me to Fanon’s work is his explanation of how the Black man possesses two dimensions; one with his Black counterparts and one with White people. Although Fanon touches on how he as a Black man assimilates to French culture to fit in, I believe that my Black skin and White mask works in the opposite way. When I am with my White family, I express, advocate, and embrace my Black identity, in juxtaposition, when I am with my Black counterparts I feel an obligation amplify their voices and minimize mine. Essentially, in both instances, I feel like I am othered in the sense as I must perform my identity in contrast to who I am with. Further, my experience as a half-Black individual has allowed me to wear a mask. I think this is something half-Black individuals know all too well as there is no “one side” to fit in.

The intended message of Too Black & Not Black Enough is to illustrate a story in which half-Black individuals often are seen as just being Black, especially when growing up in predominantly White families. Too Black & Not Black Enough aims to open the conversation surrounding how half-Black individuals feel othered in today’s media landscape as not feeling or being Black enough to speak on their Black experiences as they are privileged in the sense of being half-White as well.

Taia is a recent graduate from Carleton’s Communications and Media Studies Honours program with a double minor History and Sociology. Taia has a passion for storytelling and research and aims to mobilize these interests to advocate, inspire, and drive change. In her free time, Taia enjoys spending time with her family and puppies.