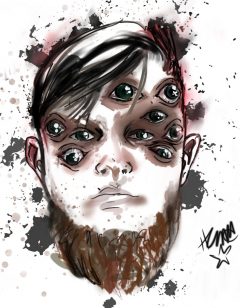 This piece, entitled, bad day, is based on the work on Vivek Shraya’s 2018 book, I’m Afraid of Men. The book details Shraya’s experience as a transwoman of colour as she navigates a Eurocentric world of surveillance, internalized and externalized forms of misogyny, culminating in her fear of men and assertions of masculinity. In this book, Shraya describes her experiences as a target and a witness to the over-sexualisation of women, racism, homophobia, transphobia, and public humiliations or violence enacted on bodies deemed inferior, with these behaviours acquiesced as ‘typical’ of men. As she navigates the world, Shraya is aware of the male gaze on her body and how this influences her decision to wear makeup or feminine attire. The purpose of this work is to re-imagine surveillance, the Eurocentric male gaze, as something monstrous.

This work begins with the image of Robert Aaron Long, who was arrested for the mass shooting at Youngs Asian Massage on March 16, 2021, as well as the murders of four other women at another spa in Atlanta, Georgia. Long targeted the massage spa and other women as “temptation that he wanted to eliminate”, asserting that these murders were not racially motivated; however, as six of the women targeted were of Asian descent, police investigated these murders to determine if these murders are hate crimes. The locations of the murders, while still to be confirmed, have also been the sites of investigations into sex work. The title of this work, bad day, comes from the media statement from Captain Jay Baker of the Cherokee County Sheriff’s Office that Long’s actions emerged as a “really bad day for him and this is what he did”, resulting in public outcry against the insensitivity of Baker’s public remarks.

My work serves to re-appropriate the term, “bad day”, by re-imagining the gaze into a physical manifestation, leading to fear or horror. bad day is a digital painting, re-imagining Long’s image and turns it into a monstrous form of surveillance, as represented by extra eyes illustrated on his face. The extra eyes are inspired by the “many eyes” makeup trend, most specifically a look achieved by @pompberry in YouTube, which was subsequently inspired by other works. Long ‘othered’ the women he targeted by turning them into objects suitable as forms of temptation and for removal. When a society works to keep people in the margins, it is easier to keep them under surveillance. While this work may be construed as misandry, or the contempt of men, bad day seeks to pair the insidious forms of surveillance and acts of violence against women as perpetrated by men.

The influences of bad day also include the works of Roxane Gay and Robyn Maynard , who detail the experiences of racialized people and women under surveillance and subsequent rationalizations, with such examples as street harassment, gaslighting, and the weaponization of anti-sex work laws within a moral framework. Long’s acts are not isolated forms of targeting women, resulting in death. Kimveer Gill shot and killed one woman, wounding 19 others, at Dawson College in Montreal, Quebec on September 13, 2006. Furthermore, the incel subculture movement, or the notion of being “involuntarily celibate” via the rejection of women, has contributed to the deaths of 40 to 50 people in Canada and the USA since 2014 . Gender-based violence remains an insidious problem in Canada, including sexual abuse, physical violence, harassment, and stalking, as well as missing and murdered Indigenous women and girls.

In closing, bad day represents the notion of being under the male gaze and how dangerous that can be. It re-imagines the normative ‘othering’ of racialized people and women, as a function of monstrous forms of surveillance. Long ‘othered’ Asian women in Atlanta, Georgia, as well as other men who have enacted violence against women, resulting in the tragic loss or harm of daughters, mothers and significant others. This work was inspired by Vivek Shraya who offers this last statement, “To this day, if I hear someone cough or clear their throat behind me, my body tenses up, shoulders raised, expecting to be a target.”

Heather McLaughlin is a fourth year student pursuing a double major in Communications and Media Studies and Psychology at Carleton University. She is also an operations professional with 15+ years of working in the mental health and substance use system involved in systems transformation projects. She is from Gatineau, Quebec, and enjoys reading books and watches too much Netflix in her free time.