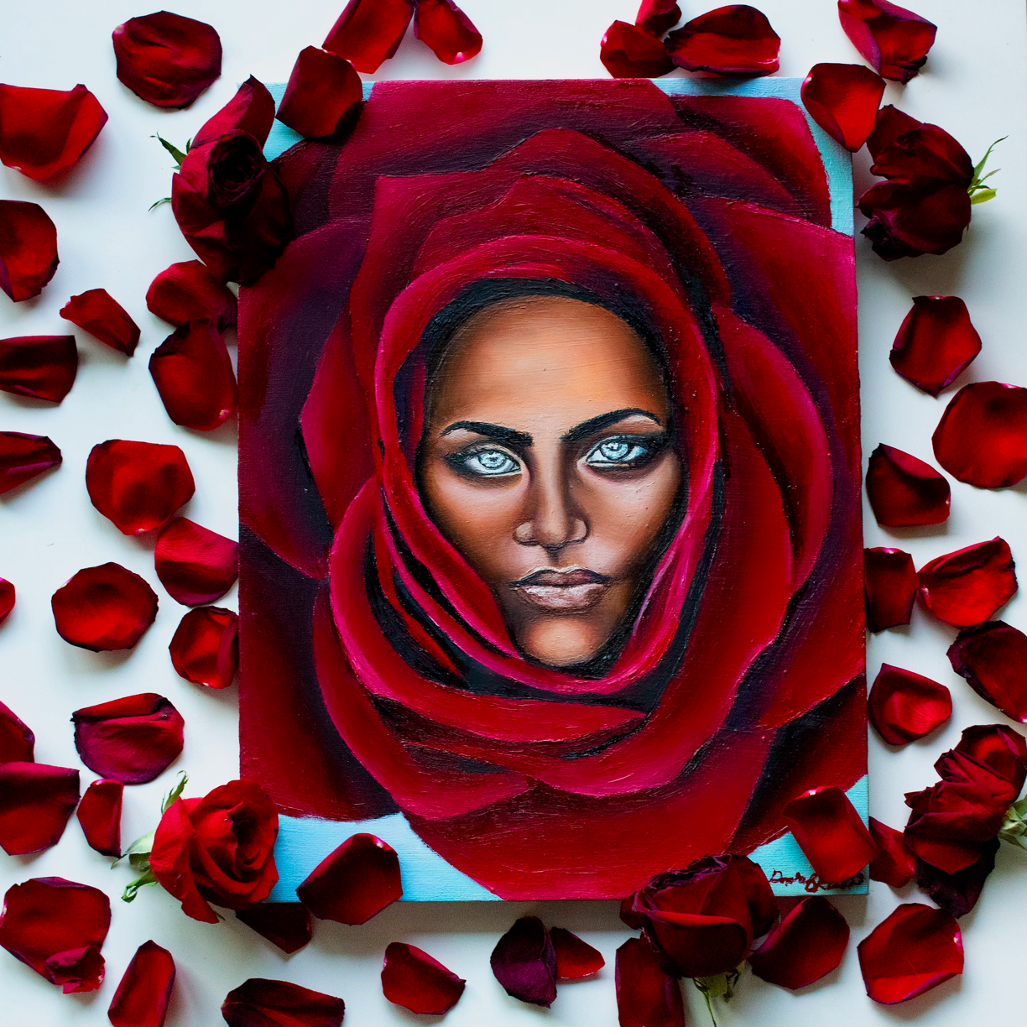 My deep reverence of women is illustrated throughout my work as a visual artist. I have explored various themes of womanhood and femininity independent of the male gaze, which has often narrated societal perceptions of women. My intention as an artist is to highlight the raw beauty and power of the divine feminine. My artwork usually features a variety of female subjects across a diverse spectrum of beauty. I have painted the female nude as a tribute to the inherent beauty and strength of the female body. I have painted the Virgin Mary, unravelling themes of motherhood and sacrifice as she holds in her arms the crucified son of God. The particular piece I am sharing here is 2020 oil painting, ‘3omri’.

My depiction of the hijab as a rose is a metaphorical allusion. Contrary to Western misconceptions of the hijab as a form of captivity, this artistic device uses the hijab as an independent element of beauty, enhancing that of the woman who wears it. The imperialist notion of the hijab being used as a religious guise to cover and silence women is challenged throughout the themes of this piece. The subject is staring directly at the viewer, an assertive and deliberate artistic choice that challenges the trope of the submissive, powerless hijabi. By transforming her hijab into a red rose, a symbol associated with beauty and passion, it takes on an active role in her identity and the unique expression of her beauty, rather than something that covers and hides her. Western interpretations wrongfully associate the hijab, and similar forms of modesty practiced by Muslim women, with patriarchal oppression from their Muslim male counterparts.

It is critical to identify the intersectionality of identity, given that each nuance provides a different implication in how an individual is perceived by their respective society. In Western contexts, women wearing hijab are not only susceptible to gender-based discrimination and violence, but additionally face the threat of religious intolerance and Islamophobia. They may experience further cultural dissonance as a result of racism and xenophobia. Up until recent years, they have not been represented in beauty ideals perpetuated by Western media through film, television, and fashion. After 9/11, Western perceptions of visibly Arab, Muslim, or otherwise brown people, became radicalized and emotionally driven in fear of a foreign, unknown threat. A qualitative study of Islamophobia post 9/11 in the United States identified “religious affiliation [as] a greater determinant of such discrimination as opposed to ethnicity, or other cultural markers”. As Western media, through both news and film, continue to depict Muslims as aggressors and terrorists, the practice of women covering themselves up in front of men has been widely accepted as another oppressive measure. My painting challenges this negative stereotype by asserting the sovereignty of the hijabi woman. The rose surrounding her enhances and showcases her beauty as the centre of the piece, rather than ‘covering her up’. Her intense stare directly at the viewer indicates an active role, rather than a submissive one. Her expression portrays confidence and resolve, indicating power in the face of preconceived judgement. Rather than being held back by the non-conforming elements of her identity that have been misconstrued, she chooses to be empowered by these elements and redefine her femininity.

By creating artwork that independently celebrates the divine feminine, I hope to communicate a narrative of empowerment that supports a woman’s freedom to choose. In a North American social climate where both systemic and socialized racism continues to affect people of color alongside nuances of religious intolerance, xenophobia, and overall ethnocentrism, positive representations are needed to defy these paradigms of hate and fear. I conclude my piece with a quote from French writer Antoine de Saint-Exupery, “He who is different from me does not impoverish me – he enriches me.”

Dorota Babiakova is a 21 year old self-taught visual artist based in Ottawa, Ontario. Versatile in a variety of visual media, her work explores themes of femininity, diversity, nature, and faith. Her collection of fine art works can be found at her Instagram page @artbydorotabk.

This painting is currently being held as an auction item. 100% of proceeds from the highest bidding price of ‘3omri’ will be donated to Help Yemen, a local Ottawa-based organization that sends vital first aid and resources in response to the humanitarian crisis affecting 80% of Yemenis. The art piece is composed of oil paint on canvas, measuring 12” x 16”. Please correspond directly with dorotababiakova@cmail.carleton.ca for more information or to place your bid