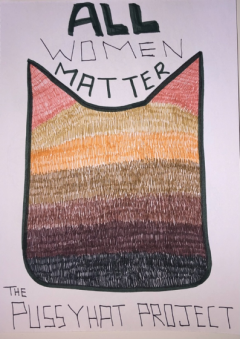 Sketch by Sheridan Worth

The Women’s March is a reoccurring event that encourages activism all over North America to march for women’s rights. Within the last couple of years, the march had a new approach that encouraged women to wear pink hats that represented a “pussy cat” when marching. This idea came to life days after Donald Trump’s inauguration. Many individuals, specifically women, were unsettled when this person of power claimed and supported the idea of “grabbing women by the pussy”.  The Women’s March in Washington now has an unofficial uniform: a pink, knitted hat shaped to look like two pointy cat ears. “Some crochet hats that look like cat ears (or, depending on the angle, pink vaginas) to wear at a march for women’s rights. The hats are supposed to reclaim the word pussy from its derogatory use by people such as Donald J. Trump, who infamously said he liked to grab women by them.

The Pussyhat Project sets a promising goal to fight against misogyny. However, the symbolism used can be challenged as it misrepresents and rather excludes certain female bodies from the movement. Many females, specifically women of colour, felt the use of the colour pink catered activism to white, cisgender, females exclusively while silencing black women and trans females.

When thinking about revisions for an activism poster, I found it important to first unpack the ways its original design is exclusive to specific bodies stemming from power choice. The colour pink not only caters to white and liberal feminists, but also supports hegemonic social norms. Two females created a symbolic hat that represents ‘femininity’ while maintaining social norms. The revision is needed to abolish this ‘default representation’ and to normalize all shades of race into hegemonic power. To favor a specific colour in activism allows hegemony to flourish once again while silencing women of colour from the movement. “The neoliberal world order relies on a global system of capitalism that is inflected through unequal relations of race, gender, sexuality, age, disability, and citizenship . One can observe the focus on “white power” as each individual, regardless of their race or positionality, is expected to wear the pussy hat even if they are not represented in the design. Hegemony is active within this poster as all individuals are wearing the pussy hat and are channeling all female bodies into one specific category. This specific category sits comfortable in hegemonic norms as liberal feminists are encouraged to ‘fight the white man’ while silencing women of colour and their basic needs for liberation.

When identifying the hegemonic and neoliberal signifiers within the original sketch, one can appreciate a more intersectional approach for an inclusive revision. Intersectionality refers to the critical insight that race, class, gender, sexuality, ethnicity, nation, ability, and age operate not as unitary, mutually exclusive entities, but rather as reciprocally constructing entities. When developing the new approach through an intersectional lens, I discovered majority of the issues came down to the colour of the pussyhat. Acknowledging this exclusion, I began to question the original design and the ways one could reapproach the main objective. “Intersectionality helps politicize the initial catalyst. This intersectional sensibility is also expressed in efforts to create an inclusive political identity for movements. Thinking about this claim when revising the poster, it is beneficial to focus on inclusion and what that may look like to multiple identities. Revising the approach to be inclusive and intersectional, one would consider women of all different races to be included in the approach. I began sketching multiple hats with all different skin colours to represent all women of different races and identities. Consequently, I found creating multiple hats and separating the skin tones would also support the binary idea of ‘differences’ that are structured through hegemonic norms. Back to the drawing board, I recreated the pussy hat design to have multiple shades that segue into one another. This design supports all races as all bodies are united into one group to tackle activism. It is important to understand that each person has a difference position within activism, but all are valid. It is also important not to use privilege to silence other bodies from achieving equal rights and support within movements. By recreating the pussy hat to be diverse in colour, we can incorporate that approach into a new poster to advocate for women’s rights against misogynist claims.

The original approach design has a great opportunity to be productive as the initial objective was brilliant. However, with help of a revision through an intersectional lens, all women from different racial backgrounds could feel represented in the Women’s March. Without dismissing the original objectives of the poster, I came up with a revision that challenged the misogynistic claim made while representing all races within the movement. The pussy hat will no longer be pink but rather a hat with multiple skin tones. This revision allows hegemonic norms to be challenged as an intersectional approach includes all women of colour to be recognized and heard within the movement.

Sheridan Worth is a recent graduate from Carleton University where she completed her Bachelors degree in Communications and Media Studies with a minor in Women and Gender Studies. Sheridan is interested in topics such as Intersectional Feminism, Gender Inequality, and Benevolent sexism. Sheridan will be perusing her career in Digital Marketing with hopes of incorporating more of an intersectional lens when targeting audiences. She hopes to grow into a Human Resourcing role to honour inclusion and representation within everyday work experience and engagements.