Numerous mobile and smart home devices now use voice detection technologies. One of the crucial features of these voice interfaces is the so-called keyword spotting system used to “wake-up” these type of voice detectors. Can one quickly build their own speech recognition detector using free data and open source software packages? Can one achieve this result by creating a relatively simple and low-memory cost model that can be run on mobile devices? In this talk, we will present our journey of building the keyword spotting speech recognition model with Convolutional Neural Networks (CNNs), and open sourced data from the TensorFlow and AIY Speech Commands Dataset. We will present our CNN models and show their performance. We will also describe what we have learned about compiling an optimal computing (CPU/GPU/Memory) architecture for these type of computational problems at a lower cost. A brief history of Machine Learning and Neural Networks/Deep Learning will be also reviewed. 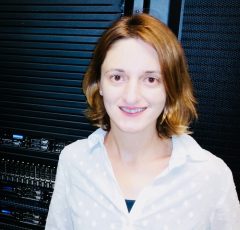 Dr. Gordana Tešić is a researcher and data scientist working with the People Analytics team at Canada Mortgage and Housing Corporation (CMHC). She is a member of CMHC’s Artificial Intelligence (AI) work group. She received her Ph.D. in High-Energy Physics from Carleton University (2009). Before joining CMHC in 2017, she conducted her research at McGill University and the Pennsylvania State University. Her research interests include machine learning and neural networks, astroparticle and neutrino physics, real-time systems and cyber infrastructure design. She was a member of several international scientific collaborations: the Astrophysical Multimessenger Observatory Network (AMON), IceCube South Pole Neutrino Observatory, VERITAS gamma-ray observatory and Sudbury Neutrino Observatory (SNO), which resulted in 115+ publications. Some of her awards include the Governor General Medal at Gold Level and University Medal for Outstanding Graduate Work – Doctoral Level (Carleton University, 2009), the FQRNT Quebec Merit Scholarship for Foreign Students – Postdoctoral Research Fellowship (2010/11), co-recipient of the 2016 Breakthrough Prize in Fundamental Physics (2016) with her colleagues from SNO, and others.

All seats sold out!