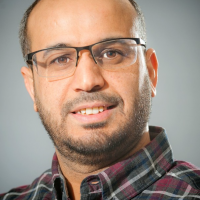 Faraj Lagum received the B.Sc. and M.Sc. degrees, both with honor, in Electrical and Electronic Engineering from the University of Benghazi, Benghazi, Libya, in 2004 and 2008, respectively. He received the Ph.D. degree in Electrical and Computer Engineering from Carleton University, Ottawa, ON, Canada, in fall 2018. His Ph.D. thesis’ title is “Stochastic Geometry-Based Tools for Spatial Modeling and Planning of Future Cellular Networks: Opportunistic Cell Switch-off and Strategic Deployment of Flying Base Stations”. His is currently a postdoctoral fellow at Carleton University’s Sensor Systems and Internet of Things Lab. In the past, He served as Assistant Lecturer at the Electrical and Electronic Engineering Department, University of Benghazi, Benghazi, Libya, from 2008 to 2012. He also served as a regional project manager with Libyana Mobile Phone, a cellular wireless service provider, Benghazi, Libya, from 2009 to 2010. He has served as a reviewer for the IEEE Journal on Selected Areas in Communications, IEEE Communications Letters, IEEE Wireless Communications Letters (WCL), EEE Transactions on Vehicular Technology, and IEEE access.