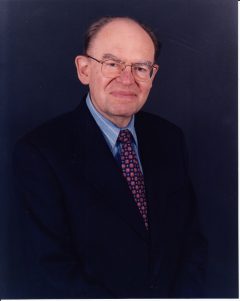 The Right Honourable Herb Gray was born in Windsor, Ontario, in 1931. He was a graduate of the School of Commerce of McGill University and Osgoode Hall Law School and was a member of the Ontario Bar. He was first elected to Parliament as a Liberal member for Windsor West in 1962 and was re-elected in 12 subsequent federal elections – a record for consecutive victories in the same riding – and served 39 years, six months and 26 days, an unequaled record for continuous days of service in the House of Commons. In 1969, he became Canada’s first Jewish Cabinet minister. Serving in a wide range of Cabinet portfolios, Mr. Gray worked in the fields of parliamentary affairs, economic and industrial development, foreign investment, finance, consumer protection, competition, international trade, federal law enforcement, reconciliation with Indigenous peoples, the environment and climate change, and Canada–U.S. border issues. In 1997, Mr. Gray was appointed Deputy Prime Minister, the first to occupy that position as a full-time cabinet post. Mr. Gray resigned from the House of Commons on January 14, 2002, to become the full-time Canadian Chair of the International Joint Commission, an autonomous international organization that prevents and resolves disputes about fresh waters that comprise 40 per cent of the boundary between the U.S. and Canada. In recognition of his extraordinary service, Mr. Gray received the title “Right Honourable” in 2002 and became a Companion of the Order of Canada in 2003. He served as Carleton University’s tenth chancellor from 2011 until he passed away in 2017. Mr. Gray is survived by his wife, Sharon Sholzberg-Gray, by his children Elizabeth Gray-Smith and Jonathan Gray, and by many grandchildren.