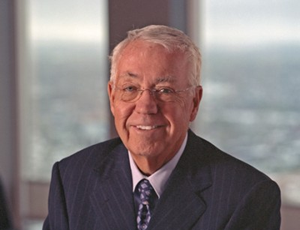 Born near Treherne, Manitoba, Clayton H. Riddell grew up in Winnipeg, graduating from the University of Manitoba in 1959 (BSc Geology).

His career began with Chevron, but by 1969 the entrepreneurial spirit took over. Through exploration and development in northeastern Alberta, financed by joint venture partners, Clay accumulated the assets necessary to establish Paramount Resources Ltd. in 1978.

Conducting operations beyond the ends of pipelines became the Paramount business model and is still evident today with Paramount’s activities, including the Athabasca Oil Sands and the Cameron Hills, Liard and Colville Lake areas of the Northwest Territories.

Mr. Riddell served on several scientific, industry and other volunteer boards, including as president of the Canadian Society of Petroleum Geologists and chairman of the Canadian Association of Petroleum Producers. Mr. Riddell had significant interest in several business trusts, including restaurants, thoroughbred horse racing and the Calgary Flames.

Mr. Riddell received an Honorary Doctor of Science degree from the University of Manitoba, the J.C. Sproule award and the Outstanding Explorer award from the American Association of Petroleum Geologists. Various business awards have recognized his entrepreneurial success.

In 2006, Mr. Riddell was inducted into the Calgary Business Hall of Fame and, in 2008, he was made an Officer of the Order of Canada. In 2014, Carleton University awarded Mr. Riddell the degree of Doctor Of Laws, honoris causa, “in recognition of his brilliant career in business and his thoughtful contributions to higher education as well as to good governance in Canada.” Mr. Riddell passed away in Calgary on Sept. 15, 2018.