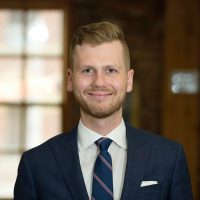 A public affairs professional specializing in strategic communications, Ashton Arsenault is a Senior Consultant with Crestview Strategy based out of their Ottawa office.

Prior to joining Crestview, Ashton worked as a political aide on Parliament Hill where he was responsible for parliamentary affairs and issues management for the Minister of National Revenue. Prior to that, he worked as a legislative researcher in the Official Opposition Office in Prince Edward Island.

Ashton has been involved in politics at every level for several years, serving as a campaign manager for a Conservative candidate in the 2015 General Election. As well, he served as the University of Prince Edward Island’s Chair of Council from 2011-2012. He continues to volunteer for various political causes and candidates.

“The Masters of Political Management program is the only one-stop-shop academic experience in Canada where the practical application of politics is taught daily. Between the talented faculty and the cross-partisan environment – aspiring political operatives, public affairs professionals, and those looking to broaden their understanding of the Canadian political landscape alike – this unique program is an experience you will not want to miss.” – Ashton Arsenault