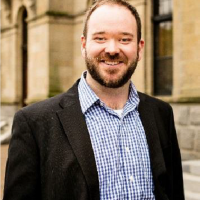 Dan Murphy grew up immersed in politics. His father was the mayor of their hometown of Rexton, New Brunswick, population 900. As a teenager, Murphy worked as a page in the New Brunswick Legislature. He then went on to study history and political science at St. Thomas University in Fredericton. After hearing about Carleton’s new political management program, he decided to make the leap to Ontario and join the inaugural class.

Murphy liked the idea of being a trailblazer. He also liked the idea of exploring politics in another part of the country. “I knew how we did things in New Brunswick, but I wondered what the process was like in Ontario, Alberta, British Columbia?” says Murphy. “No one has a monopoly on ideas.”

Murphy also saw the value of being in the national capital. “It’s easy to volunteer for a political party, to get on the Hill, to talk politics and meet people. The network you can build when you’re living in Ottawa is limitless. You can reach out and touch decision-makers.”

The skills Murphy acquired at the program were especially useful after graduation. In 2012 Murphy helped organize the New Brunswick premier’s leadership bid, in 2013 he managed the premier’s byelection campaign, and in 2014 Murphy was the director of candidate support for the New Brunswick Liberal Association during the province’s general election. “Based on what I learned at Carleton, it took me from the minor leagues to the major leagues. It was a step up. I got to learn from the pros.”

For Murphy, the program not only exceeded expectations and gave him a solid foundation for his career, but it’s also given him one more interest to bond over with his father. “It gives both of us a chance to talk shop a lot,” he laughs. “I can’t say I have any future plans to run for mayor, but you never know.”