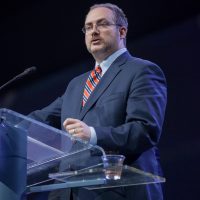 Dustin van Vugt is the Executive Director of the Conservative Party of Canada. He has held this position since his appointment by Prime Minister Stephen Harper in September 2014. A long-time Conservative campaigner, Dustin has worked in numerous federal war rooms, and countless election campaigns across North America for candidates as varied as Arnold Schwarzenegger and Randy Hillier.

Dustin obtained his Bachelor of Arts at the University of Calgary.