Director of Policy, Office of Ontario's Minister of Transportation 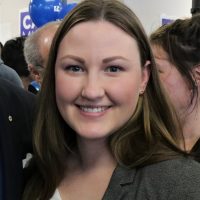 Director of Policy, Office of Ontario's Minister of Transportation

Kailey Vokes is the Director of Policy to Ontario’s Minister of Transportation, Caroline Mulroney. In this role, Kailey leads a team of advisors to deliver on the government’s commitments and identify and develop policies for the Minister to advance on behalf of the government.

After graduating from the Political Management program, Kailey worked as a policy and communications advisor to the federal government before accepting a position as Government Relations Advisor with Desjardins Insurance. During the 2018 provincial election, she ran Caroline Mulroney’s campaign in York-Simcoe. Following the 2018 election, Kailey was appointed Senior Policy Advisor to Ontario’s Finance Minister, Vic Fedeli. She was later promoted to Director of Legislative Affairs and Issues before moving into her current role.

Kailey has been involved in conservative politics as a volunteer for a decade and is currently the President of the York-Simcoe PC Association.

Vokes credits much of her success to the MPM program, which she says provided her with “hands-on, realistic instruction and assignments” that prepared her “for the intensity of working in political offices.” She also praised the program as an “incredible experience” that allowed her to “build lasting friendships across party lines.”