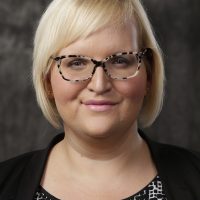 Krista Leben serves as an Advisor, Regulatory Framework at Canada Post. She has also served as Manager of Government Affairs for the Railway Association of Canada, which represents over 50 freight and passenger railway companies in Canada. She has a wide variety of experience in Canadian and American politics; in Canada she has served as an assistant to a Member of Parliament and in government relations at one of Canada’s major railways. Her American political experience includes time spent as an assistant to the mayor of a major American city, on the 2008 Democratic National Convention, and at the state and local level for the Democratic Party.

After working on events in the private sector for several years, Krista chose the Master’s of Political Management degree as a way to increase her Canadian political knowledge while also building practical skills that she could use in the workplace. “The MPM program opened many doors for me as an American wanting to work in Canadian politics. I learned so much about the Canadian political system, came away with skills that I was able to use on day one in the government relations and parliamentary roles I held, and built a network of contacts that lead to exciting and interesting job opportunities in Ottawa. The knowledge, skills, and network I gained while in MPM far surpassed other programs I took as an undergraduate and graduate student, and lead me to my dream position at the Railway Association.”