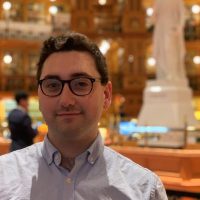 It doesn’t take long to get a glimpse into Miled Hill’s working life.

A phone call is postponed due to a team meeting. Once you’re on the phone, another rings and there’s a knock at the door. Meanwhile, Hill is typing at his desk throughout the conversation.

And yet, he is somehow totally engaged in the discussion.

“This is one of the most unique working environments in the world,” says Hill, who works in Garneau’s Ottawa office on Parliament Hill. “You’re on call 24 hours a day, but you’re here because this is what you want to do. It’s the environment you chose and it’s unbelievably rewarding.”

Hill always dreamed of working in politics. As a young teen, he began volunteering for the Liberal Party.

“My mom came here from Lebanon with nothing. Her hard work paid off and she gave me everything. Now, I want to give back to the country that gave so much to us,” he explains.

Before he found his way to the Master of Political Management program, Hill earned a BA in Political Science from McGill University. He also worked on M.P. Peter Schiefke’s federal campaign in the riding of Vaudreuil-Soulanges, becoming Schiefke’s parliamentary assistant after the election.

But despite that early start, he says the Political Management program allowed him to reach new heights.

“You build an incredible network, meet amazing individuals, and have the guidance of the professors, who hold incredible knowledge about government and the way Ottawa works,” he recalls. “Plus, you learn how to translate your essay-writing skills into an ability to craft a one-page briefing note.”

In terms of advice for current students, Hill says if you work hard, the MPM program will be there for you.

“Don’t be afraid to apply and to reach out to them. Ask them every question you can think of and for every contact they have that would help you get to where you want to go,” he says.

Hill adds that he is grateful to the family of Clayton Riddell for their sponsorship of the program and for their belief “that professionally trained political staff and public servants is essential to the good governance we rely on and expect in Canada.”

This article was originally published on the FPA website.