Special Assistant (Chief of Staff) to the Minister of Health, Seniors & Active Living 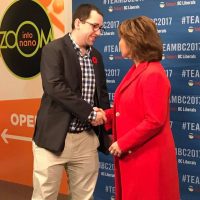 Special Assistant (Chief of Staff) to the Minister of Health, Seniors & Active Living

Born and raised in Windsor, ON., Clark moved to Ottawa to attend the MPM program after completing his Bachelor’s degree in political science and history at Huron University College at Western University. While a student in the MPM program, Clark volunteered in the Hill office of James Bezan, MP for Selkirk-Interlake-Eastman. He completed his internship in the office of the Hon. Bernard Valcourt, Minister of Aboriginal Affairs and Northern Development, where he was hired on as Special Assistant, Parliamentary Affairs. After working on the federal election in the Northwest Territories, Clark moved to British Columbia to work as the Executive Assistant in the Office of the Minister of Transportation and Infrastructure as well as in the Office of the Minister of Social Development and Social Innovation. Clark now lives in Winnipeg and is serving as Chief of Staff to the Minister of Health, Seniors and Active Living.

“The MPM program provided me with the skills and knowledge needed to work at both the federal and provincial levels of government. However, most valuable is the relationships with classmates, professors and alumni that develop not only across party lines but throughout the country.” – Nathan Clark