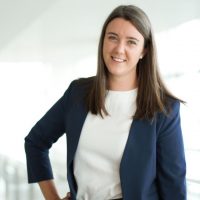 Savannah works for McInnes Cooper, a full-service law firm in Halifax. Since returning to Halifax with her now wife (Emily DeWolfe) she has been assisting the Nova Scotia Liberal Party in the planning of their upcoming leadership race and remains active in the Party.

Prior to leaving Ottawa, Savannah worked for her hometown Member of Parliament, Sean Fraser. While on the Hill, she also worked as a Regional Affairs Advisor for various Cabinet ministers including the Minister of Environment and Climate Change, and the Minister of Justice. Savannah co-managed MP Fraser’s federal election campaign in 2019 and has provided support to various other federal and provincial election campaigns from 2012-present.
During her undergraduate studies, Savannah worked at the United Nations in Vienna, and as a Senate Page.

Savannah holds a Juris Doctorate from the University of Ottawa, a Bachelor of Public Affairs and Policy Management with a specialization in Human Rights and a minor in Law, along with a Masters Degree in Political Management, both from Carleton University.

“MPM is more than applied political science. It’s learning both how politics operates, along with how you can effectively play a part in shaping the policies, platforms, and legislation that it turns out. It’s getting out of your echo chamber and meeting new friends. This program is for people who want to strategically advance an agenda that they believe it. Studying in Ottawa means that you can volunteer for NGOs, political parties, and think-tanks. You have supportive alumni and interested professionals all around you. The professors are well-known in their fields with years of first-hand experience. Many have headed up the offices of former Prime Ministers, Ministers, some run their own data firms, and others are the Nation’s experts on lobbying. There is something in this program for every passionate politico.” – Savannah DeWolfe