Special Assistant in the Minister’s Office of Immigration, Refugees, and Citizenship 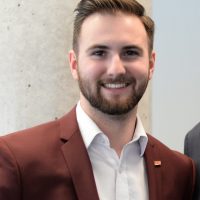 Special Assistant in the Minister’s Office of Immigration, Refugees, and Citizenship

Scott is a Special Assistant in the Office of the Minister of Immigration, Refugees, and Citizenship. A proud Liberal, Scott has worked in several political offices across Parliament Hill including in the Minister’s office of Canadian Heritage as an intern, and as a Research Assistant at the Liberal Research Bureau.

In addition to his Master’s Degree in Political Management, Scott holds a Bachelor of Public Affairs and Policy Management (BPAPM) from Carleton University. In his time at Carleton, Scott volunteered on the 2015 federal election and played an active role with the Carleton Young Liberals both provincially and federally.

“I decided to come to the MPM program to propel my career in the field of applied politics. Because of the practicum component of the program I was able to easily transition from a student into a full time political staffer. Ultimately, the friendships I made across partisan lines because of MPM are something that I will be taking with me as I further my political career.”