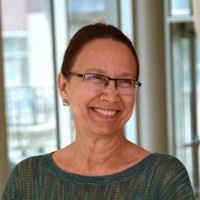 Angela Sumegi, Associate Professor of Humanities and Religion, was born and raised in Jamaica, West Indies, immigrating to Canada with her family in 1962. She completed a B.A. degree in Art History (1976) and an M.A. in Religion (1984) at Carleton. Her area of academic expertise is in Indo-Tibetan Buddhism and the interface between Buddhism and Shamanism. She lived and studied in south India for five years (1981-86), two of which were devoted to Sanskrit Language study as a Fellow with the Shastri Indo-Canadian Institute.

During that time she completed the work for her Master’s degree and was introduced to traditional Tibetan styles of scriptural study and meditation at Namdroling monastery. On returning to Canada, she combined the duties of raising three children with work in the corporate world as a film producer and sessional teaching at Carleton, the University of Ottawa, and St. Paul’s University. Sumegi’s doctoral thesis on the relationship between Tibetan Buddhism and Shamanism was completed at the University of Ottawa in 2003 and published in 2008 by SUNY Press under the title “Dream Worlds of Shamanism and Tibetan Buddhism.” Her current research interests focus on religious approaches to death as well as Indo-Tibetan Buddhism and its interface with indigenous shamanic practices and beliefs. Outside of academia, she teaches Buddhist meditation and is the founder and director of a Canadian charity that supports Tibetan refugee children in India.

In studying the relationship between Buddhism and shamanism or indigenous folk religions, my research focuses on the ambiguities and tensions that arise in the encounter between the pragmatic, this-worldly orientation of shamanic religious systems and the extra-worldly, soteriological orientation represented by normative Buddhism. Specifically, I am interested in the way in which such tensions are mediated in situations where the shamanic/folk orientation coexists with ideas of individual salvation.

My interest in this subject arose from years of teaching a very popular course on Death and Afterlife, and resulted in a textbook oriented to the needs of undergraduate students. Understanding Death: Identity and the Afterlife in World Religions deals with the beliefs and rituals surrounding death and life after death in a number of religions. In it, I aim to redress the problems of current textbooks on the subject by using conceptions of soul or inner identity as a common thread linking the various traditions.

Understanding Death: Identity and the Afterlife in World Religions. Wiley-Blackwell, 2014.