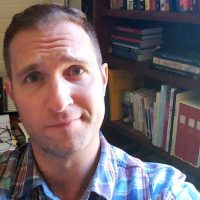 After completing a BA and MA in Religion and Culture at the University of Saskatchewan, I travelled to southern Ontario, where I completed my PhD in Religious Studies, focusing on Chinese religions and Buddhism under James Benn at McMaster University. During this time, I also spent a year and a half studying Chinese Buddhism with Dr. Funayama Toru at Kyoto University. My dissertation research focused on dreams in Chinese Buddhist hagiographies (specifically, the sixth-century Biographies of Eminent Monks and the seventh-century Continued Biographies of Eminent Monks). I have been teaching at Carleton since January of 2018.
While it is a relatively new interest for me, I have – to date – been involved with two student MA projects here at Carleton on the topic of Buddhist meditation and mindfulness in contemporary North America. In the coming years, I would be delighted to work with other students who would like to explore this fascinating topic.

Christopher Jensen. “Rhetorical Uses of the Exemplary Child Trope in the Biographies of Eminent Monks and Biographies of Nuns.” Studies in Chinese Religions 7:1 (2021). 1-49.