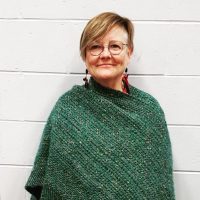 Janet Tulloch is an interdisciplinary scholar and fibre artist. Her academic teaching includes courses in ancient religions and visual and material culture. Her article on “Gender” in The Eerdmans Encyclopedia of Early Christian Art and Archaeology, Paul Corby Finney (ed.), 2017, is an excellent summary of her findings on the historical implications of 4th century visual culture for women in early Christian leadership positions. Her project as adjunct research professor is to investigate the 21st century phenomenon of religious references/practices in contemporary Canadian Art and Public Art galleries.

In October 2020, Dr. Tulloch will be an artist in residence at “The Booth” in Scalloway, Shetland. Her project during her residence will combine academic research with her fibre arts practice. She will be researching specific archaeological sites in Shetland and Orkney that date from circa 500 BCE to the early medieval period to examine migration patterns and religious/cultural remains. Her research will culminate in an art exhibition and a book based on her findings.