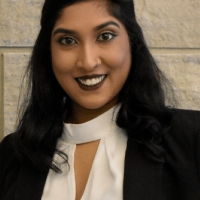 Manvitha Singamsetty is a PhD candidate in the Department of Philosophy at the University of Ottawa. Her work analyses liberal multiculturalism and suggests Gandhi’s principle of non-violence and practice of satyagraha as a framework for public and political spaces in liberal democratic societies. Her wider research interests include classical Indian philosophy, social and political philosophy, and human-nonhuman relationships in environmental philosophy.

She has over 14+ years of international experience in the D&I sector, including project management, curriculum development and implementation, inter-cultural dialogue, peace negotiations, and community engagement. She has developed curriculum and facilitated over 300 workshops on anti-racism, anti-oppression, microaggressions, workplace cohesion, leadership training, compassion, and building allyship using sociological, anthropological, philosophical, and popular education methodologies. She has worked with federal governments, universities, and community organisations in over 9 countries including, Japan, Singapore, South Africa, India, and Canada.

2008  Initiated the first ever Departmental Journal – Journal of Philosophy, Vol I Issue I titled ‘Metamorphosis’

2016 “A Ticket to Self-Discovery: Situating Yoga in Yoga Travel” in Constructions of Self and Other in Yoga, Travel and Tourism, Eds. Lori G. Beaman and Sonia Sikka, Springer International, 2016, pp. 81-89.