The following projects were manufactured with a process referred to as surfacing. Surface geometry is either transferred to or created in Mastercam (our Computer Aided Manufacturing software). Then tooling is assigned to the surfaces to produce code for the CNC Milling Centres.

This air diffuser diffuses the air at the end of a wind tunnel. It was manufactured in 8 pieces. 6 of them were surfaced on our Mitsui Seiki milling centre. The other 2 were formed from sheet metal. The complete assembly is approximately 8 foot long. 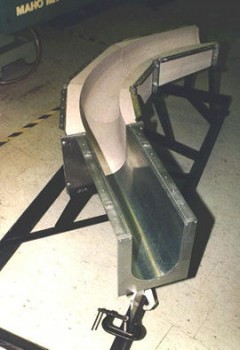 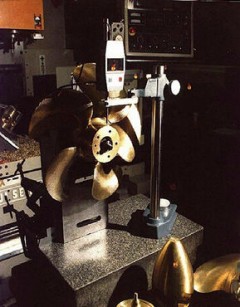 Submitted for publication by: Zubin Chinoy. The radomes and wing/body fairing skin represent a 1/7 scale wind tunnel model of the underside of the fuselage of a subsonic aircraft. The increase in drag and possible changes in lift and pitching moment are of primary interest to the experimenter. The radomes, made of easily-machined Ren Shape material and the fairing skin, made of 1/8″ thick PVC, are fastened to a 72 x 30 x 1/4″ PVC base plate. The radomes are fitted with static pressure taps. 1/16″ holes were drilled in specific locations and brass tubing was inserted through the hollow radomes and glued such that the tips were flush with the radome surface. PVC tubing will connect these static pressure taps to the data acquisition unit, for static pressure measurements in the wind tunnel. The integrated pressure distribution in both the longitudinal and vertical directions will provide an estimate of the increase in pressure drag and change in the lift due to the radomes. 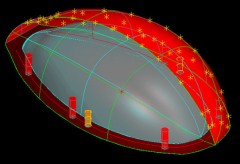 Wake traverses will also be made in the experiment behind the radomes to measure total and static pressures, where the momentum-flux deficit will be calculated to determine the total drag (i.e. pressure drag plus viscous drag) due to the radomes. The pressure measurements will be supplemented by simple flow-visualisation experiments. Pigment in oil would be used to visualise surface-shear-stress patterns and tufts on a hand-held wand would help identify regions of separated and reverse flow. Of particular interest is whether or not horseshoe vortices will form at the base of each radome.

The radomes, fairing, and base plate were all designed in IDEAS and transferred via IGES to MasterCam for machining.

Using a single edge razor blade, these Tissue Specimen Blockers accurately cut tissue samples into 1.5mm thick slices. They are made from transparent acrylic so you can see the specimen as it is being sliced. The cavities are surfaced machined on our CNC milling centres. 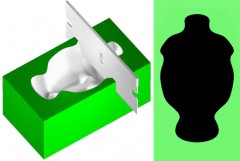 The implants were manufactured for the Biomechanics Laboratory of the Children’s Hospital of Eastern Ontario. These implants allow full range of wrist movement. Some features of this design include leaving ligaments intact during the operation, and adjustable height of the bearing insert. The articulating joint is made from a Cobalt-Chromium-Molybdenum alloy.