Caesaria and the Baha’i Shrines 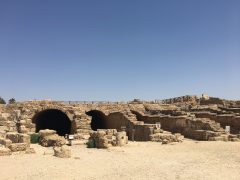 On our last day of the course, we concluded by making a trip to the Baha’i Gardens and Shrine of the Bab in Haifa. This was one of the most special days for myself, as I, a Baha’i, had never actually seen the Shrine of the Bab yet. When I visited Israel in 2011 for pilgrimage with my family, the Shrine was under restoration and we were unable to see the actual dome. Witnessing its beauty for the first time was a very memorable moment. Shortly before our visit, I gave a quick overview of the history of the Baha’i Faith and its community in Israel on the bus ride. Once our tour was finished, we visited the ancient city of Caesarea and, unfortunately, I parted ways with the group to spend time with family back in Haifa. Seeing as the Baha’is in Israel are religious minorities, I feel it is appropriate to centre this blog around religious minorities in Israel/religious diversity.

Our visit to the Baha’i Gardens in Haifa I felt was not only special for me, but for us all. I’m sure that many were unaware of the Baha’i Faith at the 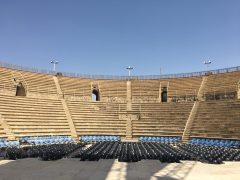 beginning of the trip, and I found the presentation they prepared for us very nice actually. Unfortunately, something about our visit to the Gardens didn’t feel quite right for me. Technically, Baha’is aren’t supposed to enter Haifa before sunset (as per the Universal House of Justice, the governing body for the Baha’is of the world), and also visiting the Gardens as a tourist felt off. Maybe I was just tired from the trip, but I didn’t have a good feeling initially. Our our drive to Haifa, it was actually not too easy to see the dome of the Shrine of the Bab, which I feel connects to our readings for the day. In the article  “Spatial Transgression of New Religious Sites in Israel”, by Noga Collins-Kreiner, the Baha’i Gardens are studied along with other new religious sites, such as a new Church of Mormon in Jerusalem. In the section on the Baha’i Gardens, she states, “the Baha’is Gardens in Haifa are landscaped, with a few low buildings surrounding the shrine on the hillside. The site is certainly visible, but it blends in with the mountainside and does not dominate the landscape.” (Kreiner, 207) Although the Gardens are quite visible from the front when walking up Mount Carmel, from my understanding, the architecture of the Gardens reflect the mentality of the Faith, which is that of unity and not distinction. It would be 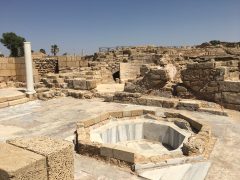 illogical for the architecture of the Gardens to not follow the same principle. This sense of unity, according to Kreiner, is also the reason why the Baha’i community was accepted by the community in Haifa. She states, “The policy not to seek converts in Israel is another reason why the people in Haifa have accepted the Baha’is.” (209)

Our visit to Caesaria, although short, was very beautiful. Even the 35-degree weather didn’t stop me while being surrounded by the remains of an ancient city beside the Mediterranean. Quite literally, Caesaria was the ‘Rome’ of Israel at the time, as Herod the Great built it as a tribute to the Roman Empire. The history of the city, as shown to us in our presentation, was rich in conflict and religious change. The city was passed back and forth time and time again between different rulers, constantly ravaged by earthquakes at the same time. Eventually, the interest for the port city faded and it was lost in time. At least visiting the ruins brought us back in time somewhat. 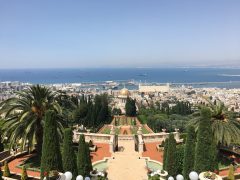 Thank you all for tuning in and reading. I hope my blogs helped you visualise our journey throughout Israel, from the West to the South, to the North, and finally to the West one last time. I’d like to thank everyone who made this trip extra special. Special thanks go to all of the supervisors of the trip, Dr. Butler herself, our guide Tikva, our driver Samer, and lastly the Zelikovitz Centre for sponsoring our trip. It was the experience of a lifetime that I won’t 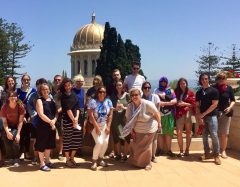 soon forget. Thank you, and I hope to see you all again one day soon.