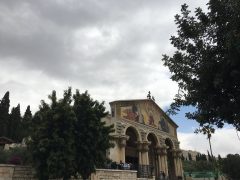 For my fourth blog, our visits to the various Christian sites throughout Jerusalem will be explored. This was a very unique experience, as Christianity takes on a very different presence and role in the city as opposed to Judaism and Christianity. Many of Jerusalem’s Christian sites are supposed to be solemn places, where Jesus suffered and was taken to walk the streets before his execution. Via Dolorosa, for example, can be translated as ‘The Way of Sorrow’. We started our day by visiting the Temple Mount sifting project site at Emek Tzurim, where we learnt more about the history of the Temple Mount. Our guide explained to us that the sifting project began because of negligence in the site, which caused a lot of the artifacts under the Mount (some areas under the actual Mount were hollow, supported with arches) to be destroyed further, and in need of careful sifting to find significant items. After this we started our Christian pilgrimage throughout Jerusalem, first walking the Via Dolorosa, 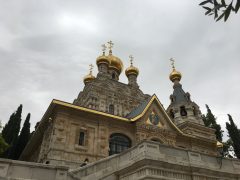 where we visited the various Stations of the Cross, the path that Jesus supposedly took when carrying the cross to the cite of his martyrdom. We then made our way to the Pool of Bethesda, where Jesus performed one of his miracles by healing a paralysed man, and saying that his sins were forgiven. After this, we had a lecture on the history of religion, monotheism, Roman paganism, and some Jewish history by Dr. Paula Fredriksen, a historian and scholar of religious studies at Boston University. Once this was done, some attended the Tower of David Light show, however, many of us decided to catch up on some extra sleep. 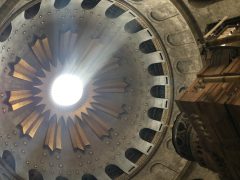 As we went through the path of the stations of the cross, as many Christians do when visiting Jerusalem, I found it interesting to follow a path of something like a pilgrimage of another religion. Seeing the various architecture and artwork in the buildings marking Christ’s journey with the cross was a new experience for me. In our readings from the previous day, it is interesting to note that in Chapter 3 of our Alexander to Constantine book, the influence of Roman architecture on early Jewish people is noted (“‘Its extensive use of columns reflected a Roman appropriation of an earlier Hellenistic architectural motif, with a distinctively Roman influence most strikingly apparent in the basilical shape of the Royal Portico’” (1094)) This 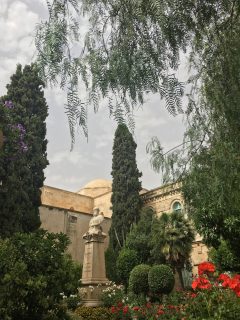 Roman design is also seen well throughout Christianity, and I find it interesting to note that Romans, who were essentially pagans, have some of the greatest impacts on the appearances of these huge, monotheistic religions. Pretty ironic if you ask me.

The Pool of Bethesda was another interesting site to visit. In our recommended article, titled, “The Puzzling Pool of Bethesda, by Urban von Wahlde, a quick history on the site and its significance in Christianity and Judaism is given. As we learnt, the Pool of Bethesda was used to hold what is called a “public mikveh” (Wahlde, 3), or a Jewish ritual purification bath. This was used to spiritually purify individuals, and all throughout Israel they can be found at different holy sites. In my opinion, by Jesus performing the miracle of healing the crippled man, as well as forgiving his sins, it signified a change in previous understandings of spirituality and religion. From my understanding, he essentially gave the message that these baths were no longer necessary. This is also hinted by Wahlde on page 4 of the article when he writes, “Both the blind man and the 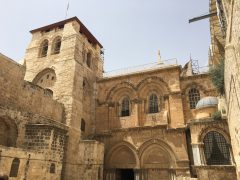 crippled man were hoping for healing. Jesus demonstrates his powers in both episodes, at the Pool of Bethesda simply by saying so. Bathing in the pool was unnecessary. His word was sufficient.” (Wahlde, 4)

We also had a taste of some of the religious tension present in Jerusalem at our introduction to the Temple Mount sifting project. Our recommended article, “Relics in Rubble: The Temple Mount Sifting Project”, by Gabriel Barkay and Zachi Dvira also writes on the subject. As stated in the article, complications began in 1990, when the Northern Branch of the Islamic Movement in Israel chose to convert the area under the Temple Mount, titled Solomon’s Stables, into a grand, new mosque (Barkay and Dvira, 1). Heavy machinery was brought to create a stairway without archaeological supervision and breaching the Antiquities Law of the State of Israel. It was permitted to continue due to political reasons. Almost 9000 tons of excavated soil was dumped, rich with archaeological matter. The team eventually managed to raise funds after four years and begin an excavation project 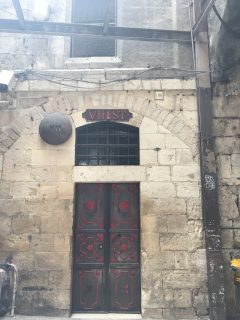 (Barkay and Dvira, 1-2). We were given a short overview of this story when we first entered the site by some of the excavators there.

Our talk by Professor Fredriksen was an interesting one, also. She went very much in depth about the connections between history and religion with predominantly early Jews and Romans. One of her main points was that although many people in the past believed in many gods, often there was one god that people or families would worship as their own. The god was seen as almost a member of their family, and provided a link between heaven and earth. Divinity was also another main concept. Things such as the moon, the sun, stars and planets all had divine connotations. In her words, “divinity is a concept that spans heaven and earth” and “the architecture of the universe spans this divinity” (Fredriksen, 2018). She also brought up the concept of filial piety, which is paying respect to one’s parents. According to Dr. Fredriksen’s talk, Augustus, once a ruler of Rome, advocated for filial piety to be recognised within the kingdom. Filial piety is a concept generally associated with Confucianism, and was discussed in an East Asian Religions class I had taken the semester before. It was interesting to hear the same concept from cultures completely different from each other in two religions classes. 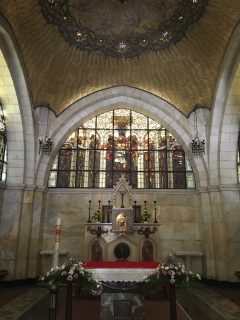 On a last note, I wanted to discuss my feelings when visiting the different Christian sites with the group, as well as on the next day when I visited the Church of Mary Magdalene and the Garden of Gethsemane with a few classmates. For some reason, when visiting the Church of the Holy Sepulchre and the Garden of Gethsemane, they did not evoke the same feelings of spirit as the places we had visited previously. Something about the sheer volume of people who had come just as tourists to see these holy sites rather than pay homage on something that should, in my opinion, be a solemn pilgrimage, started to get to me. I found people taking selfies, smiling towards the place where Jesus is said to be betrayed somewhat disheartening. Of course, their intentions are no-doubt pure, but something about it just seemed wrong. I feel like some level of reverence 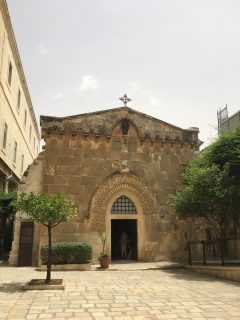 should be observed when visiting holy sites such as these. Again, this reminded me of something in our readings from the previous day. In Chapter 7 of our Alexander to Constantine book, the spiritual value of Christian holy sites to individuals is mentioned. The book quotes a very interesting sentence, reading, “Ultimately, the value of holy sites depends on judgments of faith, not findings of the spade.” (Meyers and Chancey, 2931) One of our classmates, Brittany, somewhat demonstrated this when she told us that she did not feel the same spiritual reaction when visiting the Church of the Holy Sepulchre as opposed to the nearby Tomb of Jesus, a cave where many Protestant Christians believe is the true place of Jesus’ burial. Whether or not Jesus is buried in the Church or the Tomb is a question for another day, however, she demonstrated how many Christians undoubtedly can feel a holy presence in one place as opposed to another. It is ultimately a matter a faith, and sometimes not associated with what archaeologists can find. An interesting point 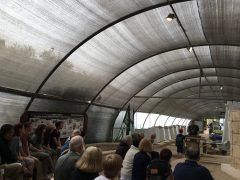