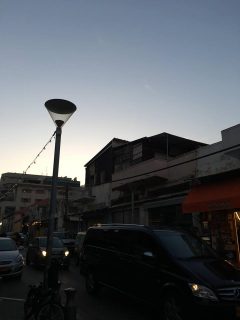 Identity provides context. This is particularly true in the state of Israel where identity plays out publicly in all aspects of life and is the foundation upon which the country was built. Bayme defines Israel as “ a living laboratory experiment of identity formation”[i]. I feel it is important to situate myself as a Jew living in the diaspora. This a situatedness allows me to explore what the effects of this positionality is vis-à-vis my identity. Such an exploration reveals some of the ways in which the familiar/strange, and the public/private interact to define identity.

As a Jew raised in the diaspora, it is a strange feeling to be in a place supposedly founded on my behalf. Being in Israel revealed dichotomies, such as between insider and outsider, and greatly shapes/d my experiences of the place. In many ways, being in a city like Tel Aviv can feel almost more familiar then being in a Canadian city. Civil citizenship, and cultural citizenship plays an important role in feeling connected to place. The nation of Israel, and the Jewish people, to which I feel a belonging is very different than an allegiance to the state of Israel, the county of which I am not a citizen. As such, I share civil citizenship with most people in a Canadian city, but in Israel I share a cultural citizenship with the majority of the population as a Jew. This shared cultural citizenship creates a feeling of familiarity, as I enjoy membership to the ‘tribe’ so to speak. Bayme describes the concept of Jewish people being bound together internationally, through a collective heritage and shared homeland, bearing responsibility towards one another as  “deeply rooted in the Jewish historical experience[ii].” This narrative is a nice, compact story. However, drawing on the heuristic of strange/familiar, what is considered to be familiar can be rendered strange when one starts to unpack it. Shared cultural citizenship, for example, can be teased apart upon close inspection. 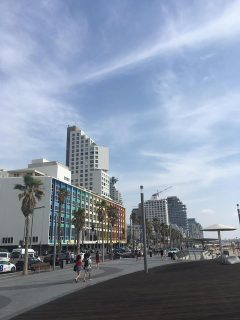 Jewish culture is not monolithic, but rather a mosaic. Ashkenazi, Sephardi and Mizrahi Jews have very different cultural practices. Hasidim would have trouble seeing similarities between themselves and reform Jews, and vise versa. Thus the idea of a totally shared cultural experience must be questioned. Nonetheless, cultural and civil citizenship intersect in Israel.  As Kranz states, “Israeli citizenship, as far as possible, is geared exclusively at individuals of familial, bio-genetic Jewish descent, and it is preferable geared at Jews who are essentially Jewish in terms of having a Jewish mother to ascertain the ideal fit between religion and ethnicity[iii]”. Through the law of return, which requires one to have at least one Jewish grandparent, I would be eligible for an Israeli passport and civil citizenship[iv]. Despite identifying and being raised as a reform Jew, I would have an easier time attaining civil citizenship in Israel than religious (cultural) citizenship because I do not have a Jewish mother. In the eyes of the rabbinate, who act as the gatekeepers to Jewish religious citizenship in Israel, I am not a Jew. Because there is no separation between religion and the state, every citizen in Israel has a registered religion and an ethnicity[v]. There is friction and tension between both types of citizenship. In a very real sense, one can be both a Jew and not a Jew at the same time. The politics of language in Israel is another example of how religion has influenced public life. 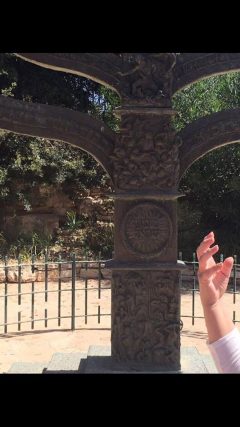 Those things at home, in Canada, that are kept and seen only in the context of my private sphere are displayed publically in Israel. For example, I do not speak Hebrew, but it is a language that I grew up hearing and seeing (within the context of religious practice for the most part) in shul and at home. My experience with the language felt strange.  What to me was confided to the private sphere was now on road signs and menus. Hearing Hebrew spoken everywhere made me acutely aware of how language is both intimate and shared, both foreign and familiar at the same time. In her writing on citizenship and democracy in Israel, Divine states “language is an instrument of identity formation, and the capacity to use it in public life is critical to defining a community and safeguarding traditions.[vi]” The advent of modern Hebrew is a clear example of using language to create Israeli identity. With a shared language, shared cultural bonds are possible.