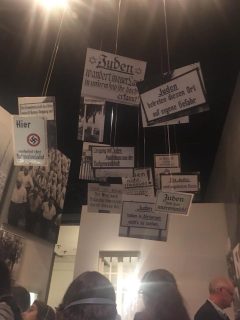 The Jewish people are a people of community, they have lived, worshipped, thrived and suffered together for thousands of years. They are unique in the way that this deep sense of community has created a collective Jewish memory. Unfortunately many have centred on and exploited the tragic events of the Jewish past or have conversely completely ignored these events in order to pursue political agendas. This blog will connect readings and events on our trip to the idea of collective memory and it’s exploitation.

On May 8, we went to Yad Vashem, which is the Israel Holocaust Museum. This museum depicts the trauma of the Holocaust, which is an event that is crucial to the Jewish collective memory. Yad Vashem focuses on the suffering of European and North African Jewry, which is integral to the modern Jewish identity even though many Jews did not experience this violence. It is integral to their identity as it solidified the anti-Semitic attitudes across the world, and brought Jewish persecution to the forefront of modern awareness. 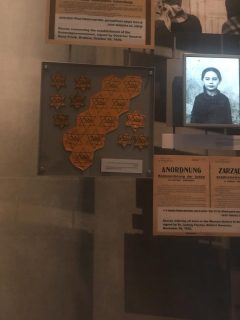 Yad Vashem ties in with Dalia Ofer’s article “The Past that does not Pass”. In this article Ofer discusses the fact that although the holocaust contributes significantly to shaping jewish and Israeli identity, but that the centrality of the holocaust in modern Israeli society and memory can be argued as “manipulating its uniqueness to advance political goals”. An example of this could perhaps be seen at Yad Vashem, where the ideology of Zionism is deeply tied to the holocaust. At the beginning and end of the museum Ha Tikva plays, which is the Israeli national anthem, which ties the idea of a Jewish state to the end of Jewish suffering- the kind of suffering that was seen in the holocaust and focused on in all of the exhibits. In addition, the organization of Yad Vashem makes it so that visitors must experience every exhibit and once they’re finished, they walk out and see a bright, beautiful view of Israel. Thus, the centrality of suffering in combination with the organization of the museum could be argued to be promoting a Zionist narrative, which follows with one of the arguments that Ofer discusses in her article of using the suffering of the holocaust to promote a political goal.

On a similar note, there have been various negative responses to the holocaust from other ethnic groups, some of which have attempted to diminish the significance of the Holocaust in history. As Dr. Meir Litvak spoke to us about, the Palestinians are one group that has historically downplayed and/or denied the holocaust, has equated it with their loss of land- which they refer to as the nakba, or have said that the Jews deserved the holocaust because of their poor treatment of the Palestinian people in Israel. This is an example of an outsider group attempting to use the holocaust to promote their own political agenda while simultaneously attempting to remove the historical significance of the holocaust both from the global and the Jewish memory. 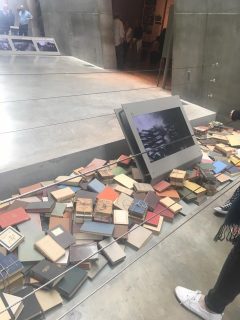 The holocaust will always be a central part of jewish identity and collective memory, but the continued focus on this event as a foundation for Zionist ideology and Israeli identity allows for this tragic event to be used as a pawn in political agendas, both by Israelis and outsiders.

The world should never forget the Holocaust, but using it to push political goals- whether Zionist or otherwise- disrespects the memory of the more than six million jews who died in this tragic event.