From South to North 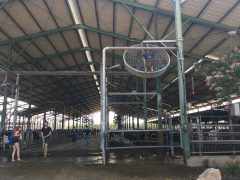 In this blog, I will dive into our adventures during our 15th day in Israel, as we approach the end of the course. We started our morning with a tour of the Kibbutz Degania, which we had just arrived to the night before. From there, we continued to the Yardenit Baptism Site on the Jordan River. After this, we made our Har Haosher Church on the Mount of Beatitudes where Jesus is said to have met with and preached to many of his followers at the time. Once we finished our tour, we drove up to the North of Israel to Mount Bental where we witnessed the borders of three countries from a single point (one of my favourite places we had visited so far). After a full day, we returned to Kibbutz Degania and had a few student lectures from some of my peers before retiring for the night. The theme that this blog will be centred around is contemporary Israeli identity. Many of the sites we visited this day had a wide range of themes themselves, and I feel that Israeli identity can best categorize them all. 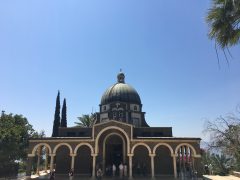 Having the tour of the kibbutz was like being immersed in an identity within an identity, the kibbutz and its community inside of Israel. From what I felt, kibbutz are basically like large families or close friends living together in a shared attempt to make their community self-sustainable. Everything in the community is shared among the people, and all work goes towards sustaining the community. There is no overarching authority that controls people, and it is essentially like a democratic-socialist society. The interesting part of the Kibbutz was that instead of being united under a religious identity that binds their community together and separates them from others, it was more of an ideological and social identity instead (one of the kibbutz we passed by on the way even had a destroyed tank on display, as they claimed someone from their kibbutz destroyed one of the last tanks during the 7-Day War). This was a very interesting contrast that I was not expecting to think about or witness during our visit. 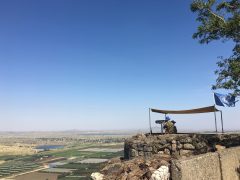 During our visit to the Yardenit Baptism site, I had a very beautiful and unique conversation with a Christian man from South Africa who had just finished baptising himself as we had arrived. As myself and a few other classmates along with Dr. Butler conversed with him, he made the point of stating that religion, or faith was a very personal thing. In his mind, he didn’t need a priest to be baptised. His understanding was that baptism should be an personal thing and coming from the heart of the person themself. Hearing this was very special to me, as I personally follow a faith and believe that the vast majority of religion and spirituality is a personal thing. Hearing this coming from a man from the other side of the world was incredible to hear. This actually reminds me of a quote my uncle once told me about “All roads lead to Rome”. Rome, at the time, was the crown jewel of a huge part of the world and people from all over flocked to see it. Today, Israel, having so many significant holy sites within its borders, has become that ‘Rome’ for religious 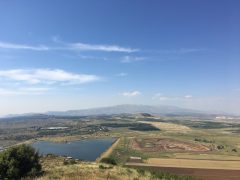 people across the globe, be they Jew, Christian, or Muslim. This is even shown in our recommended reading, titled, “Troubling waters: the Jordan River between religious imagination and environmental degradation” by Christiana Peppard. The article states, “the Jordan River has shaped the lives and religious frameworks of millions of people all over the world, most of whom have never been to the river itself.” (Peppard, 118) As we saw, a man from South Africa made his way to the Jordan river, essentially as a pilgrimage, to baptise himself in the same river Jesus once was baptised. I, myself, as well as the South African man, can also connect to our second recommended reading, titled, “Pilgrimage tourism in the Holy Land: The behavioural characteristics of Christian pilgrims”, by N. Collins-Kreiner and N. Kliot. Although I am not Christian, by going to Israel as a student tourist, and eventually pilgrim to the Baha’i Shrines in Haifa, I can connect to the concept of “tourism-pilgrimage” discussed throughout the article, as I’m sure the other man does as well, and probably everyone we saw when visiting the Har Haosher 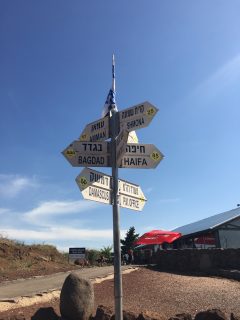 Church on the Mount of Beatitudes just shortly after (Kreiner & Kliot, 66).

Visiting Mount Bental was one of the most breathtaking moments of the trip, I felt. For myself, as well as many other students, it was one of the highlights of our visit. Just to our left we could see the mountains of Lebanon, and if we turned fifty degrees to our right, Syria was just in front of us, with Israel behind. Being able to witness the borderless land, looking not at all like a map in a classroom was the ultimate gift, and I’m sure gave us all a needed reality-check . The real world doesn’t have lines separating us, and I think it would do us all well to remember that. I find Mountains to have a certain spiritual value, as they give us such a sense of serenity. After all, basically any religious script you can find, whether it be the story of Moses, Christ, or 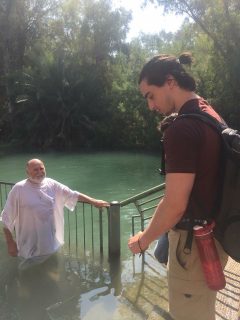 Muhammad has a mountain somewhere in it.