A trip to Israel means meeting people from a broad range of backgrounds, who share a desire to inhabit this beautiful land, but who are plagued by an identity that is still being redefined—there is no consensus for the role and relationship of religion in a modern secular state. The state of affairs should not deter the intrepid traveller, on the contrary, this young nation is eager to welcome us, and greets us with warmth and generosity. Having now spent a week in this bustling environment, the feature of this state which strikes me as the shared value of its citizens is hospitality.

Our experience of Jewish generosity began before our departure, with the Zelikovitz Centre (ZC), who are our hosts for this journey. Back in Ottawa, they arranged for representatives from the Jewish community to meet us to offer us some helpful tips and answer our questions. Besides making themselves available to us, the ZC has supported us with student subsidies whose value is immeasurable for students of a tight budget who desire to visit an admittedly expensive Mediterranean tourist destination. When we arrived at our first destination, Deborah hotel in Tel Aviv, our ZC rep Mariana greeted us warmly and presented us with gift packages that included handy items like a bag, a cap, and local maps. If all of this financial and practical aid hadn’t been enough, the ZC included several meals—completely covered, at quaint local restaurants for us. I’d like to pause here, to offer thanks and stress my personal gratitude at their generosity and support. 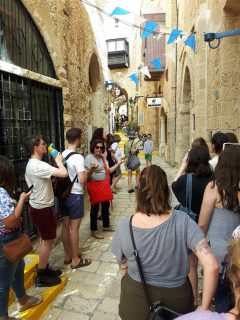 Once landed in Israel, we were greeted by the sweet and knowledgeable Tikva, our guide for the length of the trip. Tikva was born in Babylonia, in the year Israel became a nation. Her parents, living in diaspora, named her “Hope”, in their hope to one day live in the Promised Land. Earlier today, not for the first time, Tikva expressed her deep gratitude at having been alive to experience the re-entry of Jews to Temple Mount, she recalls the mass of Jews who pressed to congregate at the site, some pushing strollers while others strolled in with walkers, all eager to unite under the Israelite banner that briefly crowned the site. “I never dreamed I would see that in my lifetime,” she said from the Mount of Olives as we overlooked the beautiful Old City. A few months after their baby daughter was born, Tikva’s family moved to settle in Tel Aviv. Tikva considers herself a ‘returnee’ from the diaspora, and she mentioned how her path mirrors the return of the early Israelites in exile in Babylon after the destruction of the First Temple in 586 BCE. Since the modern state has welcomed her as an infant, Tikva has spent twelve years working as an archaeologist and raised a family before proudly taking on the torch of sharing her knowledge and love of the land with visitors from abroad. Her grasp of the ancient and modern history of her country is laced with gratitude and hope for the continued success of the Jewish homeland, with a twinge of sadness that a peace has not been struck with Palestinians.

This motif of a drop of sadness for every great joy is pervasive in Israel; even at happy events such as weddings, Jews evoke their exile and their experience in diaspora. For example, when the groom breaks the glass by stomping on it, the gesture symbolizes their demolished city and their cherished temple. This is the discussion which first greeted us when we arrived at the Diaspora Museum in Tel Aviv, where we met our museum guide, the tall blonde beauty Lindsey, heavily pregnant and proudly beaming as she shared her own wedding experience. Lindsey is from Tennessee, but she comes from Polish heritage, and her family fled the turmoil of the 20th century for the haven of America. But for Lindsey, Israel tugged at her heart strings, and as a young woman she chose to make the transatlantic return. Lindsey offered several excellent insights, notably that even after millennia in diaspora, modern Jews are not averse to ‘taking on’ outside culture, for example white wedding dresses, or again, incorporating the zodiac in synagogue iconography. According to Lindsey, Jews are happy to take on foreign traditions,  she gave the example of meals: her family was from Polish origins and so even in America their Passover meal was traditional polish dishes, which is a tradition she continues today in Israel. Likewise, she explains, other Jews cook traditional Ethiopian,  Yemeni, or Russian dishes. It doesn’t matter so much what they cook, but that they observe the Passover tradition, as is instructed in the Torah. For Jews, Lindsey explains, religion is not the only feature of their shared identity, and secular Jews, Zionist Jews, and religious Jews alike recognize shared values that unite them despite their diverse heritages. Besides their commitment to Yahweh, Jews in Israel share a language, a desire to repair the world as exemplified by Tikun Olam, a personal connection to the land Eretz Yisrael, a shared history of persecution, and Jewish creativity and contribution to the world. Her outline explains why the new state embraced higher education and innovative technology, and why it continues to receive the financial support of diaspora Jews who believe in the hospitality Israel offers to those who wish to return.

Lindsey’s six-fold definition of Jewish identity reflects the ideology of Ahad Ha’am, (Asher Ginsberg) who held that Jews should unite under a cultural umbrella that includes language, literature, music and art. In essence, Ahad Ha’am was calling for a Jewish cultural renaissance, that centered around their shared history of persecution, exile and diaspora, but that celebrates these features as part of the Jewish identity, to be key elements depicted in song and art. According to him, through their shared experiences, Jews abroad could identify with a collective identity that would eventually become strong enough to enable the formation of an Israeli homeland. In my opinion, his vision has broadly been achieved. Everywhere I turn, I see pride, creativity, education, and innovation here in Israel; absent is the stigma of religious observance, the ideology of impoverishment, and insecurity in the face of oppression. Our visit to the Palmach Museum is a case-in-point: this museum is an interactive experience like I’ve never seen before, which celebrates Jewish struggle and victory that flies in the face of twentieth-century rhetoric. It was an audio-visual walkthrough of the 1941-49 war time, the period that was not only formative for a state of modern Jews, but formative for the modern Jewish identity. As Rachel Harris writes in her chapter on “Hebrewism” and Israeli Culture, “From the beginning Hebrew culture was a hybrid”. Just like its modern Hebrew language (biblical Hebrew spoken in a modern vernacular with Sephardic pronunciation), and as Lindsey says, the Israeli state was happy to ‘take on’ the cultural diversity of its constituents. From the outset, when the state was formed it included as its national language not only modern Hebrew but also Arabic and English. Rather than fighting its unique range of heritage, Israel recognized and emphasized those similarities that can unite Jews, rather than rejecting nonconformity. 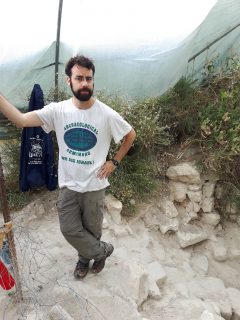 When we came to Beit Guvrin National Park, we encountered the upbeat and absolutely hilarious Assaf, a site guide who has been working at Beit Guvrin for twenty years, besides his full time career. The site is not funded by the state and is not affiliated to the university, the site is funded by tour groups, and opens only on days when volunteers book a visit. It is important for site guides, like Assaf, to be enthusiastic and to warmly greet and host the volunteer dig groups, especially because of the financial role visiting participants play. If you look up the site on Trip Advisor, you’ll find a slew of posts attesting to his humour and energy, which was incredibly contagious. His attitude reflects the work ethic of the site, where volunteering constitutes 100% of the work force; even the gift shop proceeds from consumer purchases go to fund the work. His enthusiasm for his work and for the success of archaeology in Israel, and his commitment and dedication to the slow-paced and ongoing project mirrors the sentiment of most Jews in the country. Despite the challenges biblical archaeology faces, Assaf is undeterred, just as Jews who dream of a united Jewish state continue to hope, pray, and work towards this aim, undeterred. 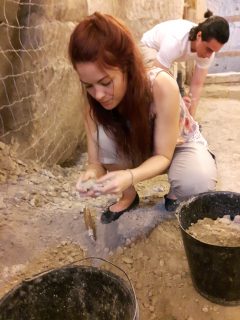 Archaeological work such as at Beit Guvrin is crucial to the Zionist project, and despite heated contestations is academic rhetoric, remains crucially important for the ‘shared narrative’ which Ahad Ha’am recommended. In an article titled “Parts of Exodus Written Within Living Memory of the Event” Baruch Halpern engages with a discussion of that earliest period of Israelite identity formation, the Exodus. The controversy over dating the Exodus mirrors the controversy over the right of return, which admits Jews like Tikva’s parents and Lindsey to the Promised Land and grants them citizenship. The issue centers around the veracity of their claim to be indigenous to the land, and therefore returnees. Halpern uses archaeology and the study of language taken together to conclude that indeed, the Exodus occurred, and furthermore that the biblical royal chronology is fairly accurate. If we consider why Halpern, like so many others, takes on this colossal challenge it is because at this time the hopes and expectations of the modern Jewish nation is for a perpetual place of safety and shelter from anti-Semitism. If someone were inclined to contest that this is unnecessary in the twenty-first century, I would like to point them to a CBC News headline I the news yesterday: “Anti-Semitism in Europe is Back, and Some Blame Recent for Fuelling it” (dated May 8th, 2018).