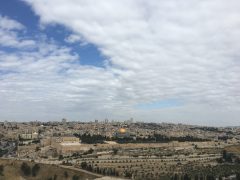 For my second blog, I will be covering our first actual day in Jerusalem, where we visited the Mount of Olives and looked over Jerusalem for the first time. We then went to the Old City and the Western Wall, eventually making our way to a Muslim family library called the Khalil Library. After that, we made our way to Yad Vashem, Jerusalem’s Holocaust museum, and heard a talk from a guest lecturer, Dr. Kranz, about Israeli and German society relations, and Germany’s modern perspective on the Holocaust.

We started the day by driving to the Mount of Olives and received a lesson on the history of the Temple Mount. Our guide, Tikva, told us about the history of the First and Second Temple, then the creation of the Dome of the Rock. 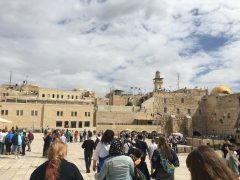 Making our way to the Khalil Family Library, we received a talk from Dr. Khader Salameh which was very interesting and eye opening to hear. He spoke of the library’s purpose and history, collecting Islamic scriptures, but what was most interesting was his view on modern-day religion/politics. He says that “all religions are the same” and that they are just “changed by the people” but coming from “The One God”.  He continued by saying he believes that the world needs a separation between religion and the state, and that we cannot control others with our own individual beliefs. He believes the solution to many of the world’s problems is by changing the minds of children through education-a very beautiful thing to hear. His openness of mind reminded me of the saying from the Quran mentioned in our readings, where Christians and Jews are said to be “people of the book” (Troen and Fish, 318), therefore demanding some sort of respect or recognition on their part (in writing, at least). 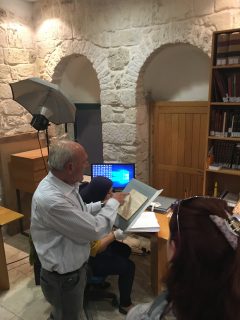 After our talk with Dr. Salameh, we made our way to a more solemn environment at Yad Vashem. Our visit at the museum was not only to become more educated on the holocaust and its impacts, but also to try and understand how it serves as a framework for Israeli (Jewish) national identity. This relates to the theme I want to centre my blog around, which is The Holocaust and Israeli Identity and the connection to the formation of the state. In my opinion, the holocaust plays perhaps one of the most vital roles in maintaining the idea of Zionism and the state of Israel. It serves as the worst example of the persecution of Jewish people in history. Relating back to the talk we had with Professor Litvak on May 6, when a threat is posed to Jewish people it cannot be ignored, which historical consequences have shown this to be the case. So far every museum concerning Israeli history which we have visited has had young soldiers also present at the museum, some working and others just hanging around. I think by training soldiers to have an understanding of what makes Israeli identity, including things such as the holocaust is a very good way in maintaining nationalism within young people who are tasked with protecting the country. By emphasizing the importance of a Jewish homeland through history and common culture, for both soldiers and the public, an identity is reinforced and the country is made stronger and more united. IDF soldiers even used to take their vows on Masada. Making military service mandatory for most of the population also serves its own purpose in producing a sense of responsibility and allegiance to the country.

After finishing our tour of the museum, we had a talk from Dr. Butler’s guest lecturer and friend, Dr. Kranz. She rose some interesting points concerning Israeli culture and the holocaust. For example, she gave a personal example where she was speaking German on a public bus just before our lecture, and someone yelled at her in anger. In my opinion, this example shows that Israeli society has still not fully healed from the effects of the holocaust. The emotional toll which it brought has carried down through generations. Relating to our readings, the cruelty of the holocaust is shown in the article “Survival in Auschwitz”, by Primo Levi. The complete loss of hope described by Levi gives the reader a small window of imagination that was the reality for millions of people. In his case, washing, or showering, even seemed pointless. He writes, “‘Why should I wash? Would I be better off than I am? Would I please someone more? Would I live a day, an hour longer? I would probably love a shorter time, because to wash is an effort, a waste of energy and warmth… We will all die, we are all about to die: if they give me ten minutes between the reveille and work, I want to dedicate them to something else, to draw into myself, to weigh up things, or merely to look at the sky and think that I am looking at it perhaps for the last time…” (Levi, 24) Levi end with this statement, “They crowd my memory with their faceless presences, and if I 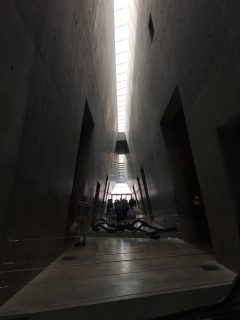 could enclose all the evil of our time in our image, I would choose this image which is familiar to me: an emaciated man, with head dropped and shoulders curved, on whose face and in whose eyes not a trace of a thought is to be seen.” (27) Certainly, the scarring effects of the holocaust are far from over for many families.

All in all, the holocaust plays one of the largest roles in creating a sense unity in shared suffering for the Jewish people and justifying the creation of a Jewish homeland. It’s effects continue to persist today, and can be passed down from generation to generation. As Dr. Salameh said, I too, believe that many of the world’s problems can be solved through educating the children to create a better future for all, and to avoid future tragedies, such as the holocaust, or other genocides, from ever occurring again. 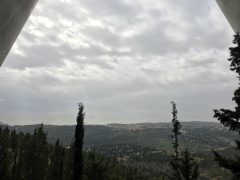