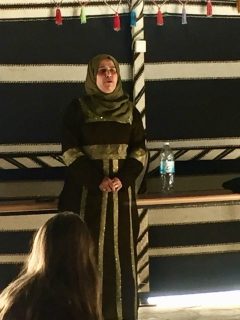 For this blog, I will be exploring our activities on May 11 by creating a blog focused on women in Israel and Judaism, with a theme of gender and sexuality. This is mainly due to the fact that we were able to have the chance to talk to and learn about the status of women in various aspects of Israeli society, be that Jewish or Bedouin women in completely different communities. Our visit to the Lakia Bedouin Women’s community from May 13 will also be included for the sake of the topic being discussed.

To start our day, we received a talk from our guest lecturer and representative of the Women of the Wall movement. Women of the Wall is a feminist organisation in Israel which started in the 1980s originally with Orthodox Jewish women (which now incorporates all streams of Judaism). Once a month, the group gathers at the Western Wall in Jerusalem to pray and chant together, often faced by hard opposition due to the laws restricting Jewish women from chanting at the Western Wall and holding traditional Torah Scrolls. Their main objectives are to be able to: pray out loud as a group of women, wear prayer straps (phylacteries), wear the prayer shawl (tallit), and use a Torah scroll. The biggest opposition they face is the power of the Orthodox community in Israel using their political influence to leverage the government to prevent them from having equal rights, and the rabbi of the Western Wall who has ultimate power and say until his death. In our reading, titled “Women of the Wall: Claiming Sacred Ground at Judaism’s Holy Site”, the organisation is discussed and the rights of women in Judaism originating from the Torah are also explored. Various rabbis also give their interpretations and opinions of these laws. I find it ironic how when women’s rights are being discussed, male rabbis are, in the end, the ones discussing the topic. Unfortunately, I think it is a result of simply prolonged patriarchy in Jewish society. It is interesting to note that in the article, historical legal actions are also taken. It states, “Israeli Women of the Wall and the International Committee for Women of the Wall… in 1989… joined in an interminable legal action during which, for the first time in history, the the religious rights of Jewish Women were argued in a court of law.” (Baumel, 288). A hopeful statement indeed. On the topic of hope, I really liked how the article by Lihi Ben 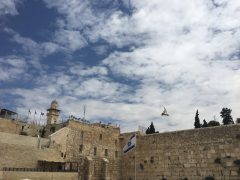 Shirit, titled, “Women, Freedom, and Agency in Religious Political Movements: Reflections from Women Activists in Shas and the Islamic Movement in Israel” focuses on the concept of consent of laws. Having consent in the first place is like the foundation for creating conditions that women, or anyone in general, can be treated equally in, in my opinion. These women that, from our talk at the Bedouin Women’s visitor centre at Lakia, that have a history of being oppressed, are finally beginning to have a future with equal rights. The initiatives being taken with Bedouin women shown to us at the visitor centre, where these women and young girls are given an education and fair income, show a change in the mentality of the public and a passion to create change by the women of these societies, in my opinion.

By having this talk from the Women of the Wall representative, we were able to witness a relatively new movement in Israel which, for many, defines their identity. Being exposed to this gave us some hint of a part of modern Israeli identity and the struggles which many face to make their identity whole and 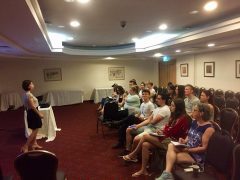 valid in their society. Later in the day, we visited the Israel Museum and witnessed many artifacts, including the Dead Sea Scrolls, which can be said to form historical Jewish/Israeli identity. Being some of the oldest records of the Jewish Testament, the Dead Sea Scrolls certainly play a large part in the foundation of Judaism and therefore, essentially Israel. It is not surprising that the museum puts great pride in their display and having the historical documents in their possession.

Our night concluded with the traditional Shabbat dinner at the home of an Orthodox Jewish family in Jerusalem. Personally, this was a very needed experience for me due to the bias I have when I hear the word “Orthodox” and “Jewish” together. When I imagine an Orthodox Jew, a Hasidic Jew is the first thing that comes to my mind because of what I have been accustomed to visualising. This is certainly not the case, which our Shabbat dinner taught me. Orthodox is a completely subjective term and can have varying levels of interpretation. The Orthodox family that we had dinner with was very modern in almost every aspect of their life. Personally, one of the only indicators that they were “Orthodox” in my eyes was that both the husband and wife covered their heads, the wife with a short 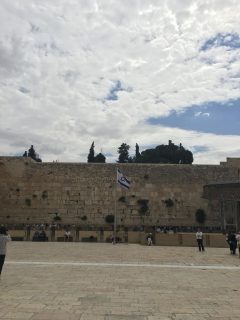 headscarf (or tichel) and the husband with a kippah. The traditional Shabbat dinner that was held for us felt very modern yet traditional at the same time. Again, this challenged my bias of “Orthodox” and “modern” being able to be used in the same sentence. I’m actually very glad I was able to clear things up for my own sake.

Thanks again for reading! I hope the blog was a refreshing read on a new and vital topic if we are to truly understand the status of modern Israeli society. Please let me know if there are any questions!