Religion and Politics in Israel 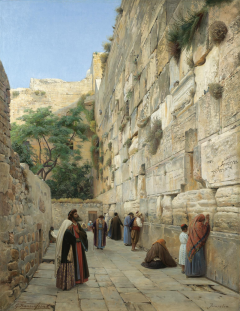 Today we had the opportunity to explore and learn about the history of the different parts of the city of Jerusalem. The day began with a lecture from our guide Tikva about the history of Jerusalem from the Mount of Olives, where the old city and the Temple Mount could be observed in full view. Her lecture, which reflected many of the important historical periods discussed by Professor Michael Zank, really highlighted the fact that religion has played a major role in the history of the city of Jerusalem and the Holy Land at large. Depending on the religion of the city’s governing authority, the physical characteristics, as well as the public and private lives of the city’s inhabitants, changed dramatically over time.

One way in which this has clearly been demonstrated during our trip is in the interconnectivity between religion and politics. As described by David Ellenson in “‘Jewishness’ in Israel: Israel as a Jewish State,” the relationship between these two concepts is quite different in Israel compared to the other countries in the West, like the United States or Canada. In North America, there is a separation of religion and the state or, in other words, a complete prohibition against the advancement of religion by the government.

However, in Israel, a completely different reality exists. The Israeli Declaration of Independence established Israel as the homeland for the Jewish People, defining it as fundamentally Jewish in nature. One of the most important institutions that assists in creating and maintaining this reality is the Chief Rabbinate of Israel, the framework for which was established by Ben Gurion in the Status Quo Agreement. This institution serves as the supreme rabbinic and spiritual authority for Judaism in Israel, with power over areas such as kashrut, marriage, divorce, conversion, and the supervision of rabbis. Despite the fact that the Chief Rabbinate has this authority, the institution is characteristically Orthodox even though other forms of Judaism and other religions altogether are widely practiced by citizens of the state. 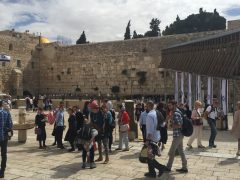 Today during our first visit to the Western Wall, we had the opportunity to see this relationship between religion and politics in action. At the Western Wall, the first noticeable characteristic of the site was that it is segregated by sex, with males receiving a much larger section than females. As Stuart Charmé describes in “The Political Transformation of Gender Traditions at the Western Wall in Jerusalem,” this is due to the fact that the Wall falls under the jurisdiction of the Chief Rabbinate, who treats the site as though it is an Orthodox synagogue, which are traditionally segregated by sex. Charmé explains that this structure is extremely problematic for many, both Israelis and non-Israelis, due to the fact that not all visitors to the Western Wall are Orthodox Jews. Many liberal and feminist Jews see this as problematic, as it reinforces patriarchal traditions that other forms of Judaism have diverged from. The segregational setup prevents women from equally enjoying the Western Wall, and it also prevents males and females from enjoying the Wall together.

Another way in which we saw the connection between religion and politics in Israel was during our lecture about the LGBTQ+ community in Israel with Daniel Jonas. Although his lecture focused on his experiences as a gay man in the Orthodox community, we also discussed the wider LGBTQ+ community in Israel. He described how, due to the fact that the Chief Rabbinate establishes Orthodox Judaism and its traditions as the ‘official’ form of Judaism in Israel, those who are not Orthodox Jews or those that do not fit the Rabbinate’s vision of Orthodox Judaism cannot get married in Israel. Furthermore, he also discussed the struggles that gay Orthodox couples face when adopting children, since they are not recognized as a traditional family.

As these examples from today have shown, the Chief Rabbinate of Israel is one institution that is evidence of the relationship between religion and politics in Israel, which is not present in many states in the West. However, as our readings and our lecture with Tikva have demonstrated, this has not always been the case. For example, when the Western Wall was not under the authority of the Chief Rabbinate in earlier periods when Muslim rulers controlled Jerusalem, men and women prayed together at the Wall. This can be seen in the 19th century painting Wailing Wall, Jerusalem by Gustav Bauernfeind, which further illustrates the relationship between politics and religion in Israel that has changed and evolved over time.