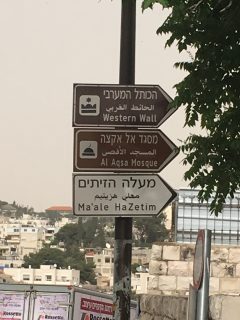 Samuel Sigal states religion is often thought of as a force that drives conflict. Even though I have only been in Israel for a short time, it is easy to see that it is a country where multiple religions, primarily Islam, Judaism and Christianity, have to co-exist, and therefore find themselves in conflict. We see the influence of the Jewish people, who are seen by many as occupiers of this land, in bigger ways such as for the mandatory Shabbat observances by public services. However, we also see the appreciation of the diversity of the population with elements such as street signs being written in Hebrew, then Arabic and English. There are tensions at important religious sites that we have been able to visit and talk about such as the Temple Mount and Mount of Olives, as well as internal clashes among Christians at the church of the Holy Sepulchre.

Sigal also remind us that, for the Jews, this is the promised land. As much as the Rabbinate and the Jews have control over how many things are done in the state, such as not allowing non-Jews to marry in Israel and shutting down public services on Shabbat, they do not have complete control. In the Temple Mount, Jews are very much excluded from it in modern day life as it is controlled by the Jerusalem Islamic Waqf which was established in 1187 to manage Islamic structures in Jerusalem. All non-Muslims are prohibited from entering under current rules. We were not able to go inside, but looking at it from the Mount of Olives we saw a beautiful gold dome (dome of the rock) that can be seen from miles away. Joshua Hammer talks about how the Temple Mount serves as the faithful symbol of God’s glory for the last 3000 years and remains the crossroad of the three great monotheistic religions. For Jews, this is the location where the first and second temples were built and subsequently destroyed. It is also where the Holy of Holies is located, who’s location was where the current Dome of the Rock is located. This is also where Abraham was prepared to sacrifice his son Isaac to show is devotion to God, which is also important to both Jews and Christians. Finally, Muslims believe this is where Muhammad ascended to heaven. Since Jews are banned from entering, they pray instead at the Western Wall, which is the last remaining part of the second temple.

The conflict that I mentioned earlier becomes evident.  We went to Emek Tzurim to participate in a shifting project. This is where you take soil and debris and shift it over a mesh grid to try and identify anything that was missed in the initial excavation. This soil comes from the temple mount, however, there was no initial excavation. The Waqf wanted to create an emergency exit from the Temple Mount and ended up clearing a pit that was more than 40 metres long and nearly 12 metres deep. All of that excavation was completed by bulldozers, and trucks just carted it all away. Many Israeli archeologist and scholars were not happy. Some claimed that the Waqf were trying to get rid of the evidence of Jewish History.

Tensions can run high in Israel, but that does not mean that every Jew, Christian or Muslim do not get along. We were able to visit a place called Neve Shalom/Wahat Al-Salam. This is a community where Muslims and Jews live together to try and promote tolerance not only in the community but further out. This was the vision of Father Bruno Hussar who envisioned a village where Jews, Muslims and Christians would live together and learn to listen, understand, respect and trust one another.