Return to the Holy Land 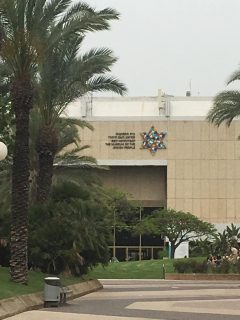 The yearning for a Jewish state has been longed for over the centuries. Many people “thought the return of all Jews to Palestine and the reestablishment of a Jewish state would have to wait until messianic times.” (Troen and Fish. Page 41) As we have seen, this is not the case and the state of Israel has seen massive expansion over the past century. Since 1948, we have seen the population of Israel grow tenfold with large numbers of diasporic Jewish immigrants finding their new home in the land of their ancestors. (Troen and Fish. Page 29) Diasporic communities can be found all across the world creating interesting cultural exchanges among the third-culture kids and those who are native to the land and Israel is no different.

In visiting the Museum of the Jewish People in Tel Aviv, we learn more about the vast diasporic communities in Israel since the start of the twentieth century. Also known as the Diaspora Museum, we saw inside models of multiple synagogues from across the world – some of which have been destroyed under conflict, or some still standing for visitors today. Galut, which means the act of expulsion or exile has been in the Jewish landscape since the creation of Adam. (Eisen. Page 221) Many generations of Jews have been exiled whether it be from the Egyptians, Romans, Babylonians or even in more modern contexts, World War II. The synagogues all have similar features across the diaspora while still being unique to the city. For example, there was one Synagogue that was from India. Our tour guide Lindsay Shapiro was telling us about how there was a large number of Jews who were displaced from their prior home and while some settled here, many settled across the silk road. Using Hebrew as a shared language, they were able to get beautiful mosaic tiles from merchants along the silk road to use in the Synagogue. The ability to use their Jewishness to share resources allowed many Synagogues to be built for the diasporic communities’ likeness and needs.

There were many Zionists who “propagated the idea that the Jews should emigrate not to America but to the Land of Israel.” (Troen and Fish. Page 44) This has led to the immigration of thousands of Jews into Israel to create a new home, but there is still many diasporic communities across the world. The community of people in the diaspora have learned to shift their practices to fit in their new homes and create lasting traditions for their families. Synagogues are used across the world to allow for communities to pray and celebrate together.