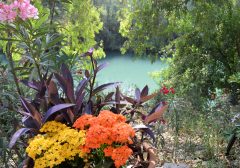 Probably the most memorable aspect of my trip to Israel will have been the singing. Song is everywhere in the Jewish nation, and it is emotional and lyrical, often reflecting the nostalgia of the Jewish identity. Song is used to commemorate and to celebrate, but also is central to participation in many Israeli traditions. Although it often employs biblical motifs and allegory, Jewish song can be secular or religious and navigate both spheres.

In Canada, public singing is not common, and is largely relegated to the occasional formality that includes the national anthem. On the contrary, in Israel I heard–and learned–Israeli songs appropriate for many circumstances, and often sung publicly as a spontaneous or impromptu gathering of Israelis and visitors, but as far as I know, not once have I heard the national anthem, and certainly on no occasion was singing formal. In Israel, singing is deeply moving, personal despite being public, and rarely imposed. Instead, Israeli hearts are filled with song and eager to make themselves heard. 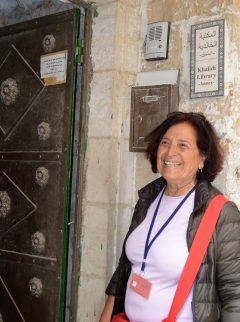 For example, in her chapter “Hebrewism” in Israeli Culture Rachel S. Harris opens her discussion of modern Israeli culture with a discussion of song and it’s use in the late nineteenth century to create a bond to the very land in Palestine and foster a longing to return to the agrarian traditions of their indigenous ancient ancestry. These early Zionist-era songs describe the beauty of the land, and many have been taken up and reinterpreted for today’s audience. Another motif of this era was labour, as diaspora Jews began to engage in redefining their identity as hard-working and self-sufficient, rather than as a ‘pariah’ minority. As Harris writes, “the new music was sung in communal gatherings, and under the influence of European socialist movements the feeling of togetherness infiltrated every aspect of this cultural experience”. The songs were so successful that some became canonized in shironim (‘songbooks’) by Yishuv organizations.

Our first evening in Israel was a Friday night (preceding Shabbat), and Sue, a lay cantor back home in Ottawa, led a makeshift service for us on the beach. The evening was full of humour (for example, because most restaurants were closed we wound up ordering Kentucky Fried Chicken and having it delivered to the beach–where we passed it hand-to-hand and ate it without plates or forks) but the highlight was neither the beautiful setting not the hilarity of our touristy circumstance; it was Sue’s melodic service. She introduced us to challah bread, and we hungrily tore into the sweet loaves as she opened the service with the song Yavo (‘peace will come’) which blends Hebrew and Arabic. She asked us to hum along, which we did to the best of our ability despite few of us knowing the tune. (By the next night, when we returned to the Tel Aviv beach for the closing Shabbat service, we performed the humming of Nigun somewhat better.) As the service progressed, leading up to the lighting of the candles in the breezy beach wind, I was struck by the longing tone of the notes of the Shema, which of course was suitable to the circumstance. 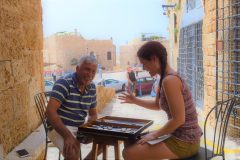 On the following night, Sue introduced a more upbeat, limerick-type song called Shiru (which is a form of alleluia, or praising of God) followed by Heveinu Shalom Aleichem which she accompanied by playful, if childish, motions and gestures used by grade school students under her tutelage at the school where Sue is principle. If onlookers chuckled at the sight of a group of adult tourists wiggling and shimmying in mumbled Hebrew, it was no more than our own giggling. The whole song-and-dance routine was laughable, but in my experience Jews do not take offense at laughter and humour, it seemed to me that our participation, such as it was, was mostly welcome. (By contrast, for example, the Christian-run Pools of Bethesda strictly rebuked us for being playful and animated amongst ourselves, and the mosque is Akko could hardly have been less welcoming, despite our modest silence and its being virtually empty of anyone except ourselves.) Rachel Harris also discusses this type of song, used for comic relief during the early period of communal singing (from the 1940s to the ’70s). In Harris’ analysis, the historical and the merrymaking areas of song would go on to inform Israeli culture as it developed in the later half of the twentieth century. Now, just as songs spread contagiously, so do Israelis spread their hospitality, and so Sue’s use of humour, childish gaiety, and tradition was a fitting introduction to Israeli culture. We later toured several synagogues, and always our group, mostly secular and composed of atheists, Christians, a few Jews, a token Muslim, and a couple others, was warmly greeted and welcomed to explore deeper.

The very first site we visited was the Diaspora Museum, where again I was struck by the use of song, but for the first time I encountered some controversy concerning it. Upstairs on the second floor, where the large-scale models of synagogues were on display, there was an enormous projection surrounded by speakers, where a montage of diaspora Jews was shown accompanied by the beautiful voice of a woman singing. The song was Kol Nidre, which features in Yom Kippur services. I loved the sound, which was new but not unfamiliar to my ‘Western’ ear, despite my not understanding the Hebrew lyrics. Prof. Butler asked our guide, Lindsey, how a woman was being permitted to sing in a public place. The question struck me as odd. I was disturbed to learn that by orthodox Haredi tradition, men cannot hear the voice of women in song, and so certainly subjecting them to this (as I discovered) famous, historical, and meaningful particular tune as sung by a woman had been contested. Lindsey was careful to say that the museum did not deem the woman’s version as inappropriate. The singer’s voice was powerful and profoundly emotional, personally I don’t think any earlier version, by man or woman, could have matched her for the tone of hope she laced into the nostalgic melody.

Daily as the trip progressed we continued to encounter song. Notably, our guide Tikva closed off every day with the short melody ‘Shalom Nevehim’ (‘peace/greeting/farewell friend’), which we all quickly learned and jovially sang along to, despite not knowing what we were pronouncing (I still only know the phonetics but not the words). It was a unifying moment at the end of each long day, to join up in a group melody before breaking apart for the evening. I appreciated the moment, if only because it signaled the familiar release, the resolution to the day, as for example the recess bell did in my childhood. I interpreted Tikva’s use of song as a form of inclusion and cohesion, and indeed elsewhere as in national anthems that is exactly what song elicits. On Fridays, when Tikva and our driver Samer would leave us for Shabbat, we sang a slightly different song, called ‘Shabbat Shalom’, which was neat because it was like an ode to the weekend. For each circumstance, Israelis seem to have a song ready on hand to commemorate but also to share in and participate. On our last goodbye, the group sang the melody she introduced to us back to Tikva, as a token of appreciation.

At the Wailing Wall, I encountered a different, prayerful place where deeply private song rang only softly. Relegated to the women’s side, only one third of the wall, a crowded space where I was elbowed and pressed up against, I nevertheless felt a connection to the women there. I heard three things all at once: soft sobs, quiet prayer, and mumbled song. At the time of my visit, I had not yet heard the lecture from the Women of the Wall, and I was (blissfully) unaware that it is forbidden for women to sing at the Western Wall. Maybe that was the cause for some of the sobbing. I saw a fence with plastic chairs next to it, and like so many other women consciously feeling rejected, I climbed up on a chair and peeked over the fence to see if there was greener grass on the other side. The men’s side looked roomy and spacious; men were deeply concentrated in mumbled readings of the little Torahs they clutched, and there were no tears. I also noticed that there was no singing on the other side–and if there was I was too far to hear it. I wondered if singing was a women’s way to connect with the sacrality of the space. I was mistaken; I later learned from Yochi Rappaport, our spokesperson representative of the Women of the Wall, that singing at the Wall is a privilege, and is reserved for men. In this case, the women whom I had overheard singing softly were actually using song as a small gesture of defiance, but to me it felt more solemn than that.

Next Shabbat we enjoyed the hospitality of Aaron (who goes by the nickname Gooey) and his lovely wife Rachel, members of an organization aimed at introducing Shabbat to tourists and guests, called Shabbat of a Lifetime. The meal they provided was probably the epitome of Jewish hospitality, and as before, I experienced laughter and conviviality. We had a good time–an excellent time, arguably one of the highlights of the trip equally for myself and all my peers. Gooey sang several songs, but one in particular resonated with me: it was an ode to womanhood, to wifely work, and finally I heard a Jewish perspective that loved and appreciated women. The song is called Eshet Chayil, which means ‘women of valour’. It reminded me of the love psalms, especially the songs attributed to Solomon. The lyricism was biblical, as was appropriate for a Shabbat dinner, but many of the womanly qualities that were being praised were broadly applicable to all women, religious or otherwise, and certainly not out of place in any home. This moment, which funnily enough was the longest song I heard throughout the trip, was a balm for my soul, and I’m sure song serves this function for Israelis in many other ways.

Rachel Harris’ discussion of music and Israel is more informed than mine, and notably she expands on contemporary interpretations, national song competitions, and the role of song in the IDF (Israel Defence Force) to consolidate the patriotism of soldiers. If I do not have space to engage with these further examples of the use of song in Israeli culture, I would like to conclude in her own words: song in Israel “is separated from the forms found in other Western countries by a commitment to Hebrew lyrics that recognized the importance of a Jewish national culture”.