The Dome of the Rock 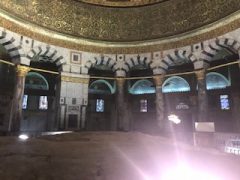 The Dome of the Rock is found in the Old City section of Jerusalem, built on the platform of Mount Moriah. The monument was designed and began construction during the rule of Abd al-Malik (685-705 ad), the 5th caliph member of a Muslim dynasty known as the Umayyad. [1] The dome was completed in 692 ad under the supervision of two financial administrative officials; Raja ibn Haywa, Yazid ibn Sallam, and Sahaba known as one of the authors of scholarly work following the traditions of Prophet Muhammad. [2] With the establishment of Islamic empires came an influx of new societal traditions which required the creation of a unique building known as a mosque, a place of worship for Muslims. The design of mosques followed a basic construction pattern derived from the Prophet’s Mosque found in the sacred city of Madinah; a square building made of dried brick and timber, an inner courtyard, and a designated space to lead prayer. The simplicity in the pattern of the building and materials used demonstrated the religious practice of modesty, the Dome of the Rock was extremely pivotal because it defied this norm. [3] The building itself is recognized for its intricate designs with mosaics, images of trees, calligraphy of verses from the religious text in the Quran depicting messages of holiness, wealth and power.[4] The reasoning for construction is continuously debated amongst scholars. Some propose it was to be an alternative to the Ka’ba, a crucial Islamic shrine to attend and pray towards, others suppose it was built to stand as a declaration of Islamic triumph and a decorative commemoration of a prophetic occurrence. [5] The positioning of the dome, arcaded support system, and decoration, stands as a recognized accomplishment of Islamic architecture. [6] 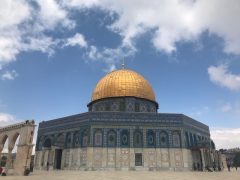 Although the beauty of the structure is admired by many, the religious sentiment is heavily debated and intersects with Judaism which has played a role in politics concerning the land it is built upon. Based off interpretations of the Quran Muslims have historically acclaimed the rock positioned in the Dome is attributed to Prophet Muhammad’s ‘Night Journey’ beginning in Mecca and ending in Jerusalem, where he is said to have then ascended to heaven. The surface of this rock has identifiable marks which have been attributed as footprints which mark the spot that God left the earth and shall return to on the apocalyptic day of judgement.[7] The Quran’s verse 17:1 describes Prophet Muhammad’s Night Journey as ‘asrã’, and ascension as ‘mi’rāj’, identifying a place of worship as al-Masjid al-Āqsa, the “farthest mosque”.[8] The vocabulary used to describe the location of the mosques Prophet Muhammad visited on his Night Journey is the source of debate. The Dome of the Rock currently sits on the Temple Mount acknowledged as the location where the First Jewish Temple was destroyed, various people have interpreted the Quran’s description of the previous Temple as a site of destruction under Gods punishment to the Jews.[9] Jerusalem holds an extremely strong connection to Judaism as it is home to many holy sites and connects sacred text to archaeology. 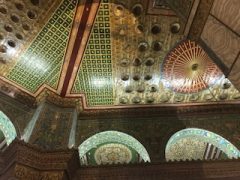 Religion is a complex system of belief, when mixed with political and social practices it becomes the justification for acting upon differences within a community. The notion of a shared geographical location connected to various religious scriptures is the foundation which social clashes and tension is built from. This has led to social boarders allowing for space to create an ‘us’ versus ‘them’ dialogue perpetuating a power struggle for control over religious space and territory. This breeds prejudice, discrimination, and biased dialogue that persecutes religious groups. The land which the Dome of the Rock is built upon, holds immense spiritual meaning for more than one religion but is regulated in a way that does not mirror this complex reality. People who identify with religions other than Islam, face difficulty passing onto the courtyard and are banned from entering the building.

On Shabbat I took it upon myself to see one of the holiest sites of Islam, regardless of various Quranic interpretation, the building is a vessel of spirituality with breathtaking design that begs for a closer look. As a Muslim I have a direct interest in the Dome of the Rock and the al-Āqsa mosque. I dressed in a long black abaya (Muslim dress for women), put on my hijab and headed to the platform of the mosque. As I had been warned due to the current societal tensions between Arabs and Jews flaring, it would be especially difficult to make it onto the platform and into the building. The first man who stopped me was from the Israeli Defense Force, he asked my nationality and for my passport, I presented copies of both my own Canadian passport and my father’s Iraqi passport. The second man to stop me at the steps was wearing civilian clothing and holding a tasbeh (Muslim prayer beads). He asked me where I was from and if I was Muslim, I showed him both passport copies and explained to him I was born and raised Muslim. He then asked me to recite Shahada which is one of the pillars of Islam and a proclamation of the acceptance of the faith. I one upped him and recited the first sura of the Quran flawlessly and he let me in. I felt a sense of pride as I prayed next to the rock, touched the rock, and wandered the area taking pictures to show those who would never be able to witness the captivating beauty hidden from the rest of the world.