The Importance of the Land of Israel in Christianity

Over the course of our trip, we have had the opportunity to examine and learn about many important Christian sites in Israel. From the Church of the Holy Sepulchre and the Via Dolorosa in Jerusalem to the Mount of Beatitudes, Capernaum, and the Church of Annunciation in the north, it is clear that the Land of Israel is important to Christianity due to the fact that many important events in the religion’s history took place here, including the life, death, and resurrection of Jesus. 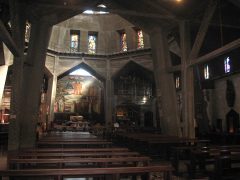 As discussed by Meyers and Chancey in “The Emergence of Christianity,” these important events have been marked by the creation of important religious sites, which can be illustrated in the example of the visit of Helena, mother of Emperor Constantine. Helena arrived in the Holy Land in 326 C.E. to identify the sites associated with the sacred stories of the life of Jesus and other biblical characters. Upon identification, some of these sites were recognized by the building of magnificent churches, such as the Church of the Holy Sepulchre, which was built on Emperor Constantine’s orders after Helena identified its site as the exact spot in which Jesus was crucified, buried, and resurrected. As more of these spots were identified by individuals over the following millennia, more and more holy sites began to spring up in the Holy Land. 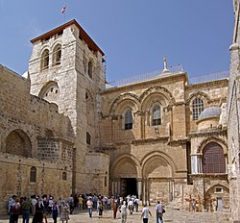 Although we had the chance to tour sites such as the Church of the Holy Sepulchre earlier on in our course, it was the tours of the Crusader sites in Akko and Caesaria that emphasized the importance of the land and its sites to Christianity. As part of the Crusades, Christians sought to take back the Holy Land and put it under their control in order to secure the land and Christian access to the important holy sites that existed there. For me personally, it was the rexamining of these events that reinforced the idea that the Land of Israel was important for Christians over the course of the religion’s history, an idea that was reflected in Collins-Kreiner and Kliot’s article “Pilgrimage tourism in the Holy Land: The behavioural characteristics of Christian pilgrims.” In their article, they describe how the Land of Israel has been important to Christians since the early years of the religion, as pilgrimages to sites in Jerusalem, Bethlehem, and Nazareth have been known to occur since the second century C.E.

Furthermore, the article also describes how the Land of Israel continues to be important to Christians today. As Collins-Kreiner and Kliot describe, Christian pilgrimage comprises approximately 700,000 individuals per year, almost one quarter of all visitors to the country. Furthermore, statistics show that this number is increasing every year, and can be expected to continue to increase annually for the time being. This large and growing number of Christian pilgrims to Israel reflects the idea that the Land of Israel and the holy sites that it contains remain important to Christianity.