The Mysteries Under Jerusalem 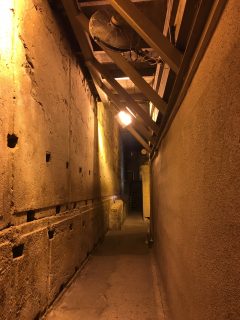 For my third blog, I will be covering our adventures throughout Jerusalem, especially under the actual city itself. This was one of the most memorable days I felt we had bonding as a group. We started our day by making our way to the Hezekiah water tunnels under the city of Jerusalem, which were designed to bring water safely into the city so that the people could be protected from siege while also maintaining a stable life. After this, we made our way through various other destroyed buildings where our guide, Tikva, gave us more historical details about the city. We made our way to the outside of the Eastern Wall after this, under the shadow of the Al Aqsa Mosque, overlooking the Mount of Olives, a huge Jewish cemetery where many are buried facing in the direction of where the Second Temple once stood. We experienced more of the culture of the old city after this, watching a movie about life in Jerusalem moments before the destruction of the Second Temple (The Burnt House), later having time to venture around the Old City and the large bazaars scattered around the area. After this, we watched a short movie symbolising the 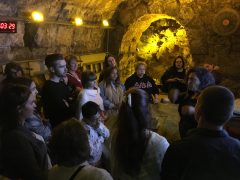 process of performing pilgrimage during the Second Temple period for a Jew. One this was done, we drove through a very Orthodox Jewish part of town, where we had somewhat of an exposure to life in a different cultural area of town. We could see signs that requested modest dress in respect for maintaining a chaste environment. After we made our way to a spectacular dinner with the group at the Joy Restaurant, then we were given a night tour of the Western Wall and the tunnels which follow the Wall for its entirety under the ground, which reflects the theme I want to centre this blog around-religion and archaeology. 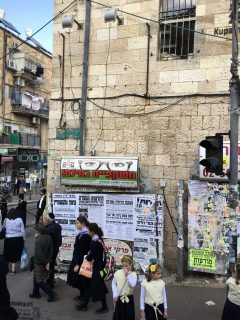 Our day was filled with exploring archaeological remains of significant locations within Jerusalem, exposing us to the connection that religion has with archaeology, especially in a city with such rich religious and historical significance. Our visit to the Burnt House gave us a surreal presentation of life in Jerusalem before it came under siege. Having the ruins of a house destroyed by an intentional fire right in front of our faces while being shown a movie gave us more of an appreciation of the depth of the events followed the city’s destruction, I felt. Referencing the “Exploring Ancient Jerusalem” article  by Dr. Yuval Gadot of Tel-Aviv University from our readings, it is stated that, “The way a household is organized, the food habits of its occupants, and other aspects of their daily lives are all culturally constructed and are influenced by and at the same time holds influence on cultural perceptions and group identity (c.f. the recent publication by Meyers 2013; Parker and Foster 2012; Yasur-Landau et al., 2011).” From our presentation on the Burnt House, as well as in Chapter 3 of our Alexander to Constantine book, the contents told us that the 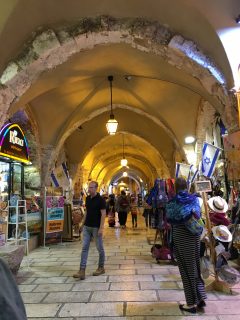 family that once lived there were priests at the time, with pottery scattered in the basement and a room dedicated to what was likely an alter or something of the like. Both the archaeological significance of the city and the religious implications of the destruction of the Second Temple for Jewish people, which still carries on to this day, I feel was shown in the best way possible to us as students studying religion and archaeology in Israel.

Standing under the Al Aqsa mosque was a point I felt that connected to our recommended readings, specifically the article titled “Jerusalem in Early Islam: The Eschatological Aspect”, by  Ofer Livne-Kafri. The influence of Jewish converts to Islam and their role in Muslim apocalyptic traditions. According to the readings, “The main groups involved in the Muslim apocalyptic traditions on Jerusalem were Jewish converts to Islam, political circles, including Umayyad caliphs, ascetics, and Qur’anic commentators, although various scholars, mainly in the field of hadit or qussas, storytellers, and preachers, contributed as well.” (Livne-Kafri, 383) Personally, I never thought much about the influence of religious converts at the time, simply due to the fact that 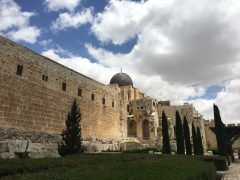 religion was largely based on family and community identity. Changing your religion would be a radical shift in all aspects of life. Reading about these Jewish influences in Islam has somewhat opened my mind to all of the other possible influences present in religious beliefs

which are unaccounted for. Since our study was around the temple mount and the significance of it to both Judaism and Islam, our recommended article “The Dome of the Rock: Origin of its Octagonal Plan” by M. Anwarul Islam and Zaid F. Al-hamad, sheds some more light on the Islamic significance of the area, something which I was not really aware of. In the readings, it states that Abdullah ibn al-Zubayr, a religious figure at the time, “defied the authority of the Umayyad caliph” and wanted to “dissuade people from travelling to Makkah for Hajj, the annual event of Muslim pilgrimage” (Anwarul Islam and Al-hamad, 111). Ultimately, his goal was to create a local area where Muslims could perform their pilgrimage instead of travelling to 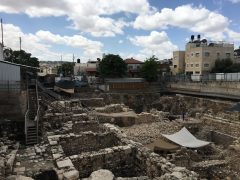 Mecca. I feel something as significant as this in the reasoning behind the building of the Dome of the Rock, and within Islam itself is very interesting to learn about.

Our night-tour of the tunnels of the Western Wall also made me appreciate the spiritual importance that the Western Wall has for Jewish people. The fact that people will actually go underground to worship the wall, all the way to the end of the western side, late into the night minutes before the area closes, I felt really shows the place that the area has in the hearts of some people. There are even synagogues for both men and women to be able to pray (separately, of course) under the ground. The part which really resonated with me, however, is the obligation I felt to have a piece of the Wall to be able to take home with me. Even I, not being Jewish, wanted a piece of the Western Wall to keep, as its significance is 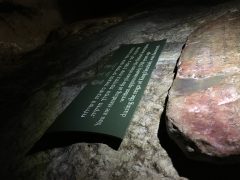 well known and you don’t have to be Jewish to appreciate the religious and archaeological significance the Wall has in the world. Our guide, Tikva, even helped me find a piece to have.

Thank you, once again, for tuning in to read my blog. I hope you can picture the dimly lit tunnels and sense of eery-peace which fills the tunnels as we walk through them, learning about the rich history of the city. 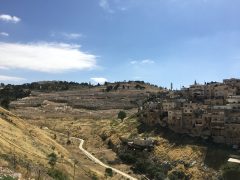