Home / Blogs – 2018 trip / The Politics of Archaeology: How the Bible Influences Projects in Israel

The Politics of Archaeology: How the Bible Influences Projects in Israel 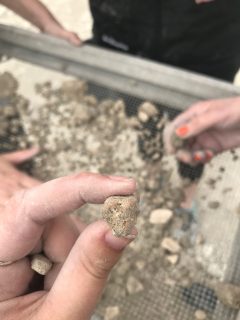 Throughout the past 11 days of the trip, Professor Butler, our guide Tikva and speakers we’ve encountered along the way have highlighted the importance of archaeology and its place within both the religious and public spheres in Israel. The role of the bible in archaeological digs throughout Israel is indicative of the tendency towards Jewish-oriented practices throughout other spheres of Israeli life. Strategies employed by certain archaeology organizations often involve the bible as the primary source that leads archaeologists to certain destinations. Often deemed to be the only accurate source, this can sometimes undermine the finds uncovered at digs. During our trip, we’ve encountered two different archaeology organizations; The Sifting Project, a Jewish-based organization working on dirt remaining from the temple mount during the second Temple period, and the group Archaeological Digs, working at Tel Maresha. Beyond the initial parallels between the two groups, there is evidence of a difference in the perspective behind the digs. While participating with Archaeological Digs, the finds, which included primarily pottery and bones, were distributed into their appropriate buckets, and sent off for analysis after a thorough sifting. The Archaeological Digs focused primarily on the historical value of the dig, and its importance to the society. Three days later, this archaeological experience was juxtaposed with The Sifting Project. The introductory lecture had a more pro-Jewish, anti-Muslim slant. At the end of the sifting portion of the tour, one of the archaeologists discussed various finds with us, immediately categorizing them into different periods, and their relationship with the Second Temple. The narratives of the two experiences contained some parallels, but different in level of biases and in some ways, the purposes of the digs. 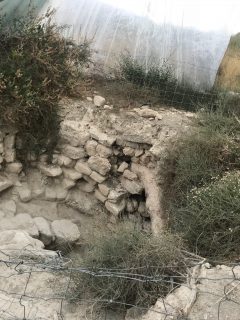 The politics of archaeology were not only evident in these two digs, but in the relay of information in museums and other locations we’ve visited throughout the trip. The topic has been integrated into most of the historical areas discussed by our various speakers. Dr. Butler has reminded us occasionally of the different in narrative between different information we’ve heard, which has been helpful for me to take a pause and analyze the information I’ve been accumulating. The careful relationship between religion, specifically Judaism, and archaeology can be further examined in Essential Israel: Essays For the 21st Century, edited by S. Ilan Troen and Rachel Fish, particularly when examining the role in biblical archeology in cementing the Jewish ties to the land. The “Holy Land” has thousands of years of historical evidence, some of which remains untouched due to the religious significance of the area.

Research from a wide variety of disciplines including biblical scholarship, archaeology, theology, history, and social sciences supported the Jews’ deep and vital historical connection to the Promised Land even as it is used today to argue competing Jewish and Arab claims to Palestine (Troen, ch. 4, pp. 81).

The political relationship between Israel and Palestine is an example of the politics of archaeology in that the conflicts in the political sphere have seeped into other spheres of Israeli and Palestinian life. The Dead Sea Scrolls were found by a Bedouin child, once their presence became known, they were immediately within Israeli possession jurisdiction. This has added to the tension between Israel and Palestine, the latter believing they should have the Dead Sea Scrolls in their possession, especially considering the economical advantages of having a facility showcasing the scrolls. The reality of archaeology as a field, with particular emphasis in Jerusalem, is the impact of political alignment and religious belief on the focus of the dig and its additional aspects. Many digs are funded by religious groups and remain within that community for the duration of the excavation. It’s difficult to assess the full impact this might have on the digs and their accuracy. The two digs we saw, as well as the Dead Sea Scrolls represent some factors of the expansive world of politics within the archaeological community, including the conflict that occurs outside archaeology that directly affects relations.