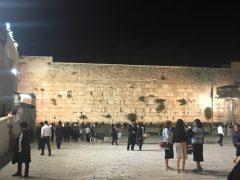 King Herod the great ruled the land of Judea for many years and was known as King of the Jews. He was heavily influenced by Roman architecture and create many large construction projects over his reign, including the completion of the second temple. (Meyers and Chancey. Page 50) In order to fund his large construction projects, King Herod had to implement high taxes which has led many “New Testament scholars’ [to have a] desire to amplify Jesus’ role in helping the poor and downtrodden as an obvious reading of the available evidence.” (Meyers and Chancey. Page 52) 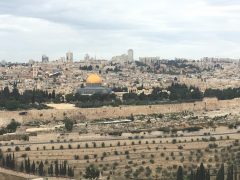 The second temple was destroyed in 70 CE by the Roman Empire. (Troen and Fish. Page 182) This prompted the Jewish people who survived to be exiled from their homes and move into a Diaspora. All that was left of the temple was one part of the Western Wall. When East Jerusalem was taken over from Palestine following the Six Day War in 1967, surges of people flooded the walls of the Second temple to pray causing the town to start talks for building a plaza in front to allow room for more visitors. (Bar and Cohen-Hattab. Page 397) Within the walls of the old city, we in the present day see two Islamic holy places, Dome of the Rock (Completed in 691 CE) and Al-Aqsa Mosque (From 8th century CE), the Western Wall Plaza and the Church of the Holy Sepulcher. The mountain that hold these holy sites are linked to many historical Jewish events like Abraham preparing his son Isaac for sacrifice, the creation of the world is said to happen at the foundation stone, better known as the holy of hollies, and even the creation of the first human. (WWHF. 2018) 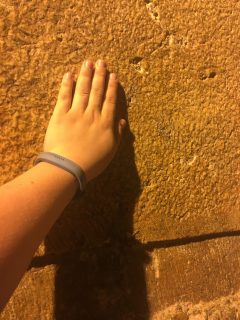 Visiting the Western Wall today is a moving experience.  There are hundreds of visitors at any given time who are there to pray and reflect on the earlier times of Judaism. People of all faiths join together at this place and write tiny prayers to place into that wall for God. Under the western wall are the Kotel tunnels. The narrow tunnels bring you “through ancient and fascinating subterranean spaces with exquisite archeological findings, such as large stone arches, water pits, an ancient water aqueduct that ends at the Strouthion Pool, and more.” (WWHF. 2018) There is a synagogue for men to pray with an overlooking area for women. This space allows for people to pray at the temple walls like they might have if it was not destroyed. These tunnels are the closest that people of Jewish or Christian faith can get to the holy of hollies as the Dome of the Rock was built on top. (WWHF. 2018) There is a small sitting area right beside this location so that people are able to pray there. This is a serene place where the majority of the sounds are quiet prayers to the God above. For Israeli citizens, tourists and pilgrims alike, the Western Wall tunnels provide a historical view of the glorious second temple and a powerful spiritual experience.