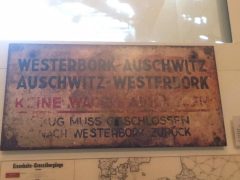 Zionism is a word that gets thrown around a lot among scholars of religion when describing the return of the Jewish people to Israel. Settlements across Israel grew exponentially with multiple cities having over one-hundred-thousand people. (Troen and Fish. Page 21) The success of the “Zionist settlement and the extraordinary growth it has occasioned have been met with appreciation and recognition” (Troen and Fish. Page 65) Over the past twenty days, we have travel across the landscapes from the high mountains of Masada to the lowest beach in the world at the Dead Sea, the luxurious gardens to the barren desert and the sunny beaches and blue skies. The concept of a Jewish state has been around for centuries and in 1948 became real. (Troen and Fish. Page 14) The Jewish people have continued to be exiled from their homelands, leaving larger populations in the diaspora leaving a longing for the reunion of the Jewish people in the home of their ancestors. 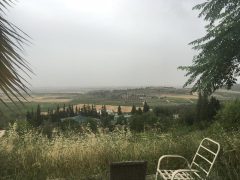 One thing inside the country that was needed for there to be a Jewish state was communities. One thing that is seen throughout the country multiple modern cities cropping up among the landscapes. We read in our textbook Essential Israel, that “Israelis “own” their property through long-term and renewable leases from the Israel Lands Authority or the Jewish National Fund.” (Troen and Fish. Page 68) This gives the state an overall control on the population while still allowing Israelis to have the flexibility in their leasing. After World War I, the “[World Zionist Organization] made the communistic kibbutz the prime instrument of settlement.” (Troen and Fish. Page 68) Kibbutz Degania is located in Northern Israel and hosted us for dinner and let us stay the night. A Kibbutz is defined as “A collective farm in Israel, whose members work cooperatively and do not hold private property” (Oxford. 2018) Living on the Kibbutz and touring around brought home the Zionist idea of having a greater community that thrives in teamwork.

We toured the Palmach Museum and learned about the Israeli Defence Force – another staple in the Zionist movement. This Museum is an interactive display that shows the lives of eight fictional soldiers and their time throughout the war leading up to the formation of Israel as a Jewish State. The Palmach “established in 1941 and closely aligned with Labor Zionism, [they were an] elite unit of the Haganah, with over two thousand young men and women members (many from kibbutzim) by the time of the 1948 War.” (Troen and Fish. Page 406) We met a wonderful man at the end of our tour who was fourteen when he enlisted in the army. When questioned why he wanted to join so early, he talked about how he was hopeful of what the Jewish people could accomplish and for a Jewish State. The anticipation for a Jewish state and the eventual creation of one made the IDF an even stronger nationalist force in Israel and young people from all over join the movement. 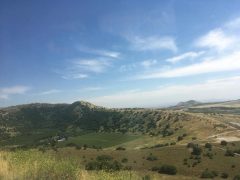 When we visited Yad Vasem, there was an inherent Zionistic feel that filtered through the museum. Yad Vasem is the Holocaust memorial and educational museum build to honor the genocide of the Jewish people during World War II. The museum was a lot more in depth than ones we are used to in Canada. It not only showed death camps as a whole, but broke it down by giving the three main camps their own scale model as well as information plaque, rebuild a portion of the Warsaw Ghetto streetscape and had one section of the railroad tracks that brought the Jewish people into Auswitzch Concentration Camp. We read in Essential Israel that “the Holocaust might have been decisive to convince the world of the necessity of a Jewish state but at the same time it almost buried the Zionist dreams. (Troen and Fish. Page 60) It made people around the world understand that there was a need for a Jewish state while also massacring a large number of Jews from around the world, leaving them unable to see the Zionist dream come into filiation.

Even living away from the land of Israel, the Jewish people have remained hopeful of a Jewish home remembering the verse from Isaiah saying, “all Israelites have a share in the world to come, for it is written.” (Isaiah. 60:21) Wheather this world to come is going to happen soon, the hope for a Jewish state is became a reality seventy years ago and the Zionist movement have been growing across the world ever since, with people believing in the necessity of a Jewish state.