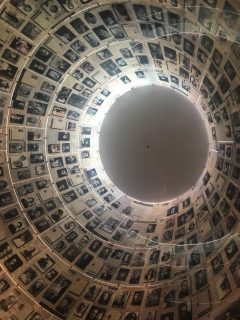 A large part of our trip has been about trying to understand the various perspectives that are present in Israel. The dominant ideology in Israel is Zionism, and many of our activities, excursions and readings have related to this ideology. This blog will thus be connecting the events of our trip to the theme of Zionism, while drawing on both required and recommended course readings.

The reading, “From Zionism to Zion” by Michael Brenner discusses the foundations of Zionism, both from a historical sense and in a more modern context. Simply put, Zionism is the want for a Jewish state in the historical land of Israel, an ideology that began in the nineteenth century with Theodor Herzl. This movement was initially based on a religious connection, however Zionist attitudes now manifest in different ways in the various Jewish communities across the world, with secular Zionism being popular as well, which is discussed in “Israel: A Jewish Democracy” by Yedidia Stern.

Another important reading to understand the more modern and practical context and application of Zionism is Ben Gurion’s Status Quo Letter. In this letter from 1947, Ben Gurion defines the role that religion will play in the new State of Israel’s public life. This letter explicitly states that the State of Israel will be a Jewish state, and that it will cater to Jewish holidays, dietary restrictions and education. Through these declarations, Ben Gurion showcases his Zionist attitudes, and succeeds in the Zionist goal, which is a Jewish state in the land of Israel.

On May 4, we went to the Diaspora Museum at Tel Aviv University. One way this museum ties into the theme of Zionism is through David Szymin’s photography exhibit. In the later part of this exhibit, Szymin- or “Chim”- photographed new Israeli, blue collar immigrants returning home to the historical land, but portrayed them in a way that was very raw and honest. These people had suffered, but once they returned to the land of Israel, they could practice their religion freely and be connected to their ancestral lands. Therefore, these photographs are significant to the Zionist ideology as they portray the return of the Jewish people to the historical land of Israel. 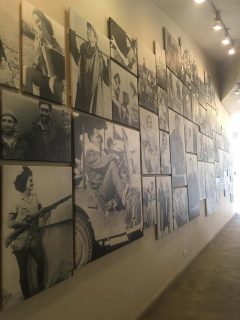 On May 5, we had a question period with Nava from the IDF, which showcased the zionist attitudes in the military. When she served in the army she worked in the Conversion program to convert non-jewish soldiers. As she discussed this topic, she used the same rhetoric that was used in Brenner’s article as well as in “Zionist Settlement in the Land of Israel/Palestine” by S. Ilan Troen, where she was helping soldiers to reclaim their homeland, reconnect with their Jewish roots and return to their Jewish family. This contributes to Zionist ideology as it is a clear connection of Jewish religiosity to both Israeli citizenship and the military, thus confirming that Israel is a fundamentally Jewish state.

Another clear example of the Zionist attitudes in Israel was shown on our visit to the Palmach Museum on May 6. This museum showcased the zionist attitudes in the paramilitary force the Palmach, which predated the Israeli Defence Force. The Palmach played a key role in the founding of the modern Israeli state by fighting in the war of independence, therefore the Zionist ideology is intertwined with the history of the Palmach and with the founding of the modern state of Israel. The narrative that was presented to us was very Zionist, with the Palmach being glorified and presented as the right side of the conflict, whereas the Palestinians were largely ignored in the presentation. The focus on the Zionist narrative and the ignorance of a Palestinian one clearly shows that the organization believes that they had the religious and moral obligation to reclaim the land, while ignoring a Palestinian claim to that same homeland. 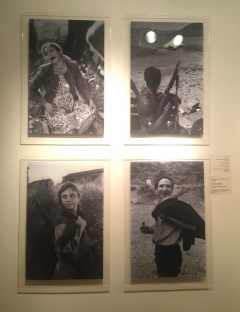 On this same day we also had a lecture from Meir Litvak, who declared himself a Zionist at the very beginning of his lecture before discussing the Palestinian responses to the Holocaust. While discussing these responses, which largely lie in diminishing or denying the Holocaust, it was clear that his narrative was a Zionist one. He felt that because of the Palestinian diminishing of the Holocaust, in addition to the explicit anti-semitic attitudes expressed from other Middle Eastern states, that this necessitated an exclusively Jewish state because there is no other way to keep the Jewish people safe or give them a means to protect themselves while also recognizing their historical suffering.

On the 13 of May, Benjamin Porat came to speak to us and through his lecture he offered some points that critiqued the Zionist narrative. Due to the divergence in definitions of who is a Jew, the maintenance of a Jewish state becomes difficult. When certain groups of Jews are discriminated against- whether diasporic communities or denominations- the Jewish state becomes a state that only accepts a fraction of the global Jewish population. This discrimination is one reason for tension in Israel, and it leads to disputes about power, and underlying those disputes are questions of which version of Zionism the state should follow: secular or religious.

On the 13 of May, we attended a lecture given by Sarab al-Quder, a Bedouin woman who spoke to us about the oppression of the Bedouin people by the Israeli government, especially through the removal of their land rights. The experiences by the Bedouin people are an example of the negative side of the Zionist movement, as the establishment of a Jewish state means the removal of other groups who are native to this land as well.

Zionism is everywhere in modern Israel, and is deeply intertwined with the complicated political situation between Israel and Palestine. Through the beginning portion of our trip it has been fascinating to see how the Zionist narrative has been incorporated into the narratives of history, religion and politics and I look forward to continuing to critically engage with this narrative through the rest of our trip.