This publication may be downloaded for free from:

Taxonomic notes and scanning electron micrograph illustrations have been provided for 103 species of the more abundant and ecologically diagnostic benthic foraminifera commonly found in the coastal waters off British Columbia – marsh species have been treated elsewhere and are not included herein. This monograph, the first major systematic treatment of foraminifera in the area, will ease identification problems for future paleoceanographically and biostratigraphically oriented foraminiferal workers.

The inside waterways of British Columbia and Washington State occupy a relatively young and narrow coastal trough known as the Georgia-Hecate Depression. This depression extends about 4000 km from Alaska to the Gulf of California. The Georgia-Hecate Dep 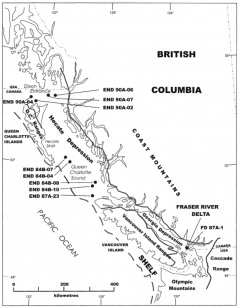 ression is bounded to the west by the Vancouver Island Range and Olympic Mountains and by the Coast Mountains and Cascade Mountains to the east. The coastline of British Columbia bounding the Depression to the east forms a complex network of inlets, straits, passes, sounds, and narrows (Thomson, 1981). The Queen Charlotte Sound – Hecate Strait region found within the Depression is of importance, not only for its hydrocarbon potential but also for the clues that more recently deposited sediments may provide about the Quaternary paleoceanographic history of the west coast of Canada. The distribution of Quaternary foraminifera in the region has been shown to be closely linked to local climatic and paleoceanographic changes. Unfortunately, very few other researchers have utilized the rich Quaternary benthic foraminiferal faunas found off the British Columbia coast in their research. The purpose of this paper is to ease potential systematic difficulties for future foraminiferal workers by inventorying the various species of benthic foraminifera found on the British Columbia continental shelf – marsh foraminifera have been illustrated elsewhere and are not included here (see Patterson, 1990a). To this end brief taxonomic notes and Scanning Electron Micrograph illustrations for 103 of the more abundant and ecologically diagnostic species belonging to the predominant genera of the region are included herein.