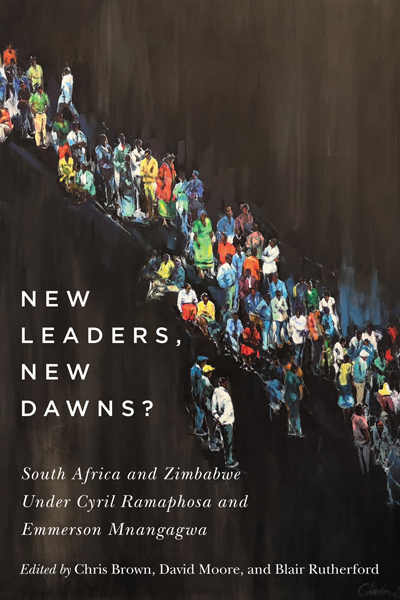 In late 2017 and early 2018, South Africa and Zimbabwe both experienced rapid and unexpected political transitions. In Zimbabwe, Robert Mugabe, the only leader the country had ever known, was replaced in a “soft coup” by his erstwhile vice-president, Emmerson Mnangagwa. Over a twelve-day period in February 2018, South African president Jacob Zuma was prematurely forced from office by his former deputy president, Cyril Ramaphosa. The widespread popular rejoicing that accompanied their arrival compounded the shock of these sudden transitions.

New Leaders, New Dawns? explores these political transitions and the way they were received. Contributors consider how the former liberation heroes Mugabe and Zuma could have fallen so low; the underlying reasons for their ouster; what happened to their liberation movements turned ruling parties; and, perhaps most importantly, what the rise to power of Ramaphosa and Mnangagwa foreshadowed. Bringing together fourteen leading international scholars of southern Africa, and adopting a political economy framework, this volume argues that the changes in leadership are welcome, but insufficient. While the time had come for Zuma and Mugabe to go, there is little in the personal histories or early policy actions of Ramaphosa and Mnangagwa that suggests they will be capable of addressing the profound social, economic, and political problems both countries face.

New Leaders, New Dawns? reveals that despite what these new leaders may have promised, a “new dawn” has not yet arrived in southern Africa.

Mugabe’s Legacy Coups, Conspiracies, and the Conceits of Power in Zimbabwe by David B. Moore

Zimbabwe’s party-internal ‘coup’ of 2017, and deposed president Robert Mugabe’s death nearly two years later, demand careful, historically nuanced explanation. How did Mugabe gain and retain power over party and state for four decades? Did the suspected and nearly real ‘coups’, the conspiracies behind them, and their concurrent mythomaniacal conceits ultimately, ironically, spell his near-tragic end? Has Mugabe’s particular mode of power reached a finality with his own downfall, as his successors struggle more to balance Zimbabwe’s political contradictions? Will the phalanxes arrayed against Mugabe’s control fray further, as Zimbabwe fades?

Mugabe’s Legacy delves deeply into such questions, drawing on more than forty years of archival and interview-based research on Zimbabwe’s political history and current precariousness. Starting with the mid-1970s, it traces how Machiavellian moves allowed Mugabe to reach the apex of the Zimbabwe African National Union’s already slippery slopes, through the complexities of Cold War, regional, ideological, generational, inter- and intra-party tensions. The lessons learned by the president and the nascent ruling party then turned gradually inward, ultimately arriving at a near-collapse that may now pervade all of the country’s political space. David B. Moore vividly charts this rise and fall, all the way to Zimbabwe’s tenuous chaos today.