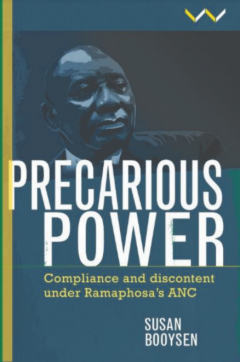 An incisive analysis of South Africa’s ANC power-as party, as government, as state.

South Africa’s African National Congress (ANC) is in decline, its hegemony has been weakened, its legitimacy diluted. President Cyril Ramaphosa’s appointment suspended the ANC’s electoral decline, it also heightened internal tensions between those who would deepen its acquired status as corrupt and captured, and those who would remodel it as redeemable. These are the incontrovertible knowns of South African politics; what will evolve from this is less certain.

In Precarious Power, renowned political scientist Susan Booysen uses in-depth research and analysis to distill that which is bound to shape South Africa’s political future, Booysen focuses on contradictory party politics and internal ANC dissent that is veiled for the sake of retaining an electoral following. Also exposed is the incongruous, populist policy­making, protest politics and the use of soft law to ensure it does not alienate angry citizens, fueling further discontent and protest. The ANC’s power has become exceedingly precarious. Precarious Power is the name of the political game, for the foreseeable future.

The comprehensive analysis in Precarious Power will appeal not only to political scientists and postgraduate students, but to all who take a keen interest in current affairs.

About the Author
Professor Susan Booysen is a political scientist, author and analyst of South African politics. She is also director of research at the Mapungubwe Institute for Strategic Reflection (MISTRA), emeritus professor at the University of the Witwatersrand, Johannesburg, South Africa and visiting professor at the Wits School of Governance. Booysen’s third book in her Wits University Press trilogy of research-driven books on the African National Congress of South Africa, Precarious Power: Compliance and discontent under Ramaphosa’s ANC, was published in 2021. The first two parts of the set were The African National Congress and the Regeneration of Political Power (2011) and Dominance and Decline: The ANC in the Time of Zuma (2015). Precarious Power (http://witspress.co.za/catalogue/precarious-power/) is available from South African bookshops and digitally from online stores such as Amazon’s Kindle Store and Barnes & Noble. She holds a D.Litt. et Phil. from the University of Johannesburg (1988). Her areas of specialization are South African and Southern African politics, public policy, governance, elections, comparative politics of Southern Africa, political sociology and research methodology. Her research fellowships include a post-doctoral fellowship at the Southern African Research Program (SARP) at Yale University, USA. She is past president of the South African Association of Political Studies (SAAPS) and is on the editorial board of the South African Journal of Political Studies, Politikon. She does peer reviews for a wide range of South African and international scholarly journals.